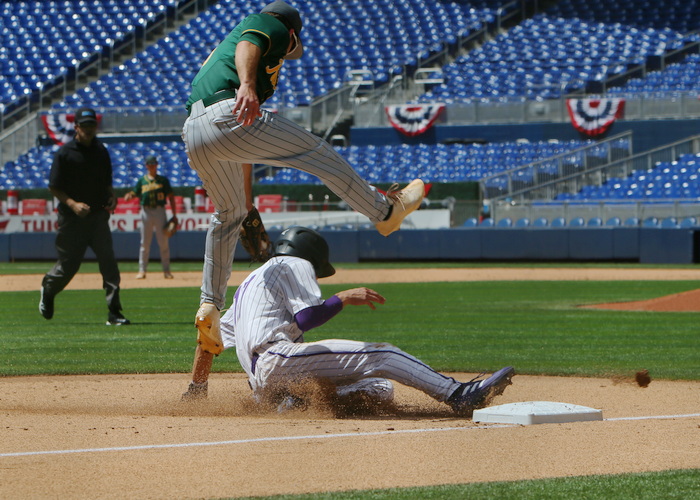 It’s a once in a lifetime experience, playing a game at loanDepot Park, home of the Miami Marlins. That’s where Southwest, now 15-4 for the season, extended its win streak to six games with a 7-3 win over Killian on Tuesday afternoon.

The Eagles spotted Killian a 2-0 lead before piling up their runs over the final three innings.

“It’s special,” said Southwest manager Mandy Peleaz about playing in a Big League park. “It’s a good time for the kids, a good experience. I don’t know if they were more excited about getting out of school or playing here. But it was a good experience. The Marlins do a great job with it.”

Killian manager Hernan Adames echoed those sentiments, noting that his team was hyped about playing there today.

“The kids have been looking forward to this all year,” Adames said. “We try every year to give them that exposure, to make them feel like a Big Leaguer – for two hours and 20 minutes – so they were very excited before the game started.”

The outcome did not sour the experience.

“Regardless of win or lose, it’s all about creating memories for kids in high school,” Adames said. “We try to do it the pro way at Killian.”

Adames took his Cougars to Georgia, Orlando, now loanDepot Park, and at the end of the season to Key West.

“I would like to get more wins, of course, but we’ve been thin on the pitching staff and some guys were down with injuries,” said Adames of his 6-11 Cougars. “So, this year has been a rough one, trying to put together a lineup to compete at a high level especially with the type of schedule we have.” 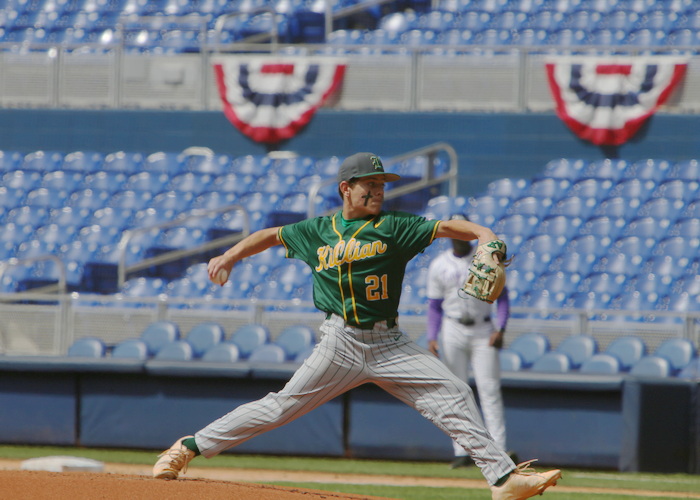 Still, Adames said he is proud of the team’s effort.

“They give me everything they’ve got,” Adames said. “The bottom line is we’ve got to hit a little better, timely hits with men in scoring position, and the pitchers stop walking people. We’re walking a lot of guys throughout the year. So, that makes us also playing from behind a lot of the times.”

Cougars pitching issued eight walks and also hit a batter on Tuesday, opening the door for Southwest rallies in the fourth, fifth, and sixth innings.

But it was the Cougars who jumped on top 2-0 in the third inning, giving a bit of a cushion to freshman pitcher Kendry Blanco, who in his initial start went three innings allowing just one hit.

Alexander Guevara displayed some heads-up baserunning to get the Cougars on the scoreboard first. After drawing a walk, he went all the way around to third base on a fielder’s choice ground ball off the bat of Nikolas Periera, and then scored when the throw to third got away. 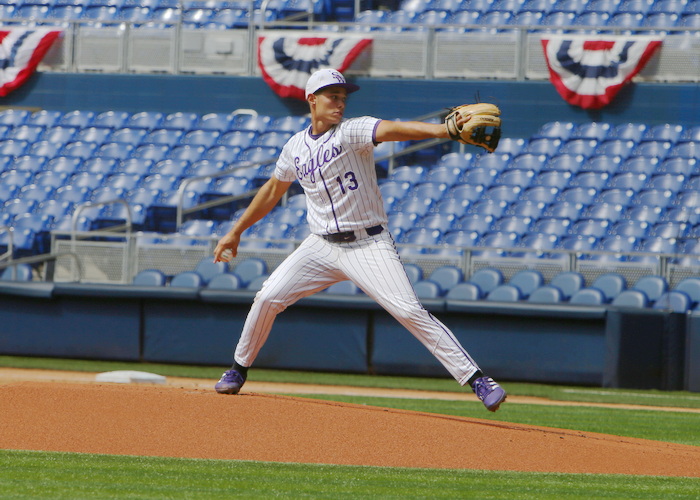 Later in the inning, Jose Lopez delivered an RBI-single, one of his two hits in the game, scoring Robert Krawczyk, who also singled for one of the Cougars’ four hits in the game.

Killian added another run in the sixth when Lopez delivered his second hit of the game and came around to score on an RBI-single by Alexandro Forte.

But by then, Southwest had done its damage. The Eagles scored three runs in the fourth inning to take a 3-2 lead. Tyler Duarte walked and came around to score Southwest’s first run on a fielder’s choice grounder from Erick Machado.

Matthew Ferrer then came up with a clutch 2-RBI single, giving the Eagles the lead for good, scoring both Machado and Erick Juvier, the Eagles’ starting pitcher who worked three innings, striking out three and allowing just two hits.

“I just stuck to my approach, kept my hands back, just wanted to drive to ball,” Ferrer said of his key hit. “I was just sitting back, trusting my hands, got a fastball in and just drove it,” added Ferrer, who said he enjoyed playing in the Big League park. “It’s a great experience, it’s one of a kind,” he said. “Love the infield.”

Duarte singled, stole a base and scored one of two Southwest runs in the fifth inning that extended the lead to 5-2. Duarte went 1-for-2 with two runs scored as he soaked in the atmosphere while contributing to the win.

“It was very exciting playing here,” Duarte said. “I just had more energy today. It was a good experience.”

Alberto Rigual also scored in the inning after drawing a walk and eventually scoring on a sacrifice fly from Diego Santos. 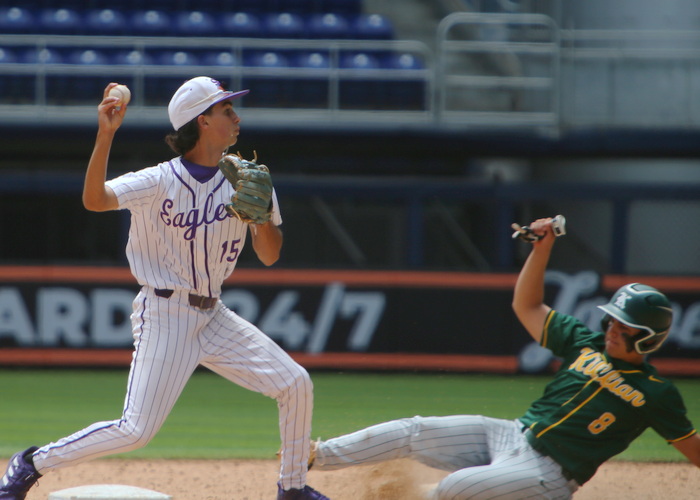 Killian’s Alexandro Forte (8) slides into second as Southwest’s Matthew Ferrer (15) throws to first. Forte delivered an RBI single for Killian while Ferrer came up with a clutch 2-RBI single for Southwest in the Eagles’ 7-3 win on Tuesday at loadDepot Park. Photo by Glenn Sattell

Southwest put the game out of reach with two more runs in the sixth. Christopher Alvarez delivered an RBI-single scoring German Ferrer, who had two of the Eagles’ six hits. Alvarez then scored on an error following a single by Joel Cabrera.