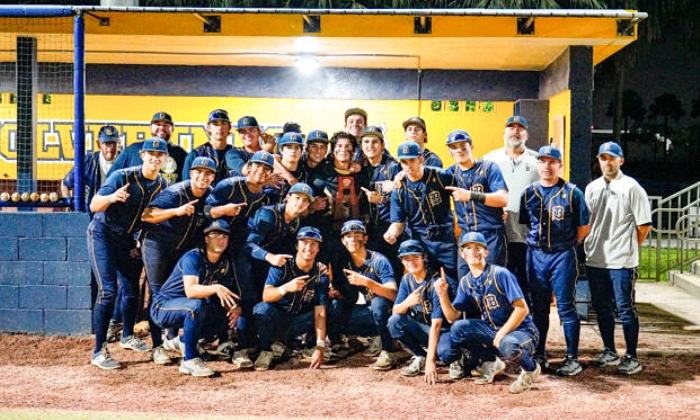 The celebration was subtle and conservative.

After all, being the defending District 5A-16 champions from a year ago and the favorites to win it again this year, Belen Jesuit looked upon Wednesday night’s 5A-16 championship game against Pembroke Pines Charter as simply a matter of “taking care of business.”

And that’s exactly what the Wolverines did as they jumped out to an early 6-0 lead on their home field and cruised to an easy 10-0 win over the Jaguars in a game called after four-and-a-half innings on the 10-run rule.

About the only thing that slowed down Belen on this night was Mother Nature as the start of the game was delayed by nearly two hours thanks to some stormy weather in the area that set the lightning detectors off.

Other than the inclimate weather, nothing else went wrong for the Wolverines who improved to 19-7 and will now enter next week’s regional playoffs as a likely No. 3 seed in the 5A-Region 4 bracket and will host a regional quarterfinal contest at their field on Tuesday, May 10 at 7 p.m.

“A real good night for us,” said Belen manager Jerry Albert. “We feel like everything has been clicking for the last month or so and we’ve been playing really well. Tonight we just kept doing what we’ve been doing which is being very efficient on offense. Doing all of the fundamental things very well which is not easy. There’s a reason you work very hard on your fundamentals so that you can execute them.”

Albert referred to his team’s ability to drop down perfectly executed bunts, five of them to be exact and three of which turned in to infield hits. And when they were not bunting, Wolverine players were laying down the lumber as well as they wound up pounding out an eye-popping 17 hits in just four innings off three different Pines Charter pitchers. 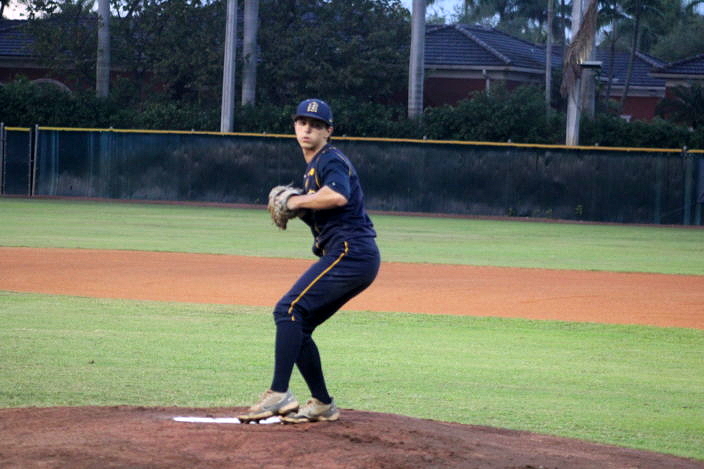 Nick Alonso, Mike Cruz and Chris Bayo led the way as they all went 3-for-3 at the plate, Alonso scoring three runs, Cruz two runs and Bayo with a double and 3 RBIs.

After scraping across a single run in the first thanks to a two-out RBI single by Ernie Echeverria, Belen essentially put things away in the last of the second by scoring five times to build a 6-0 lead. RBI singles by DH Raul Aspuru, Alonso and a 2-RBI double by Bayo highlighted the inning.

That was much more than enough for Belen starter Matt Huembes. Normally the team’s closer, Huembes took the mound for the first time as a starter on Wednesday and didn’t flinch. He pitched all five innings, facing just 18 batters and gave up just three hits while striking out three and not walking a single batter to record the win.

“Matthew was fantastic,” said Albert. “We asked him to do something tonight he hasn’t had to do all year, start the game. We’ve been using him in relief and tonight was the first time he started. We know he could do it because he pitches a lot over the summer, has a rubber arm and he’s a competitor. He was superb tonight.”

Belen added two more runs in the third to balloon the lead to 8-0 before scoring twice more in the fourth to complete the scoring. If there was any kind of a clutch moment, it was when the Wolverines plated that 10th run.

With bad weather about to start rolling in again which would’ve caused another delay, Jose Fernandez delivered a two-out RBI single up the middle to score Jordan Cordero from third. With the lightning detector about to go off again, Huembes quickly and efficiently retired the Jaguars in order in the top of the fifth to end the game.

“I think in the first inning my curve ball and changeup were there but kind of lost it in the second inning,” said Huembes. “I think maybe the humidity got to me a little bit but once I got around to the second time in the lineup, I found it again and did what I had to do. We’re a very confident team right now and we feel like we have everything clicking. We’re ready to make a run at states.” 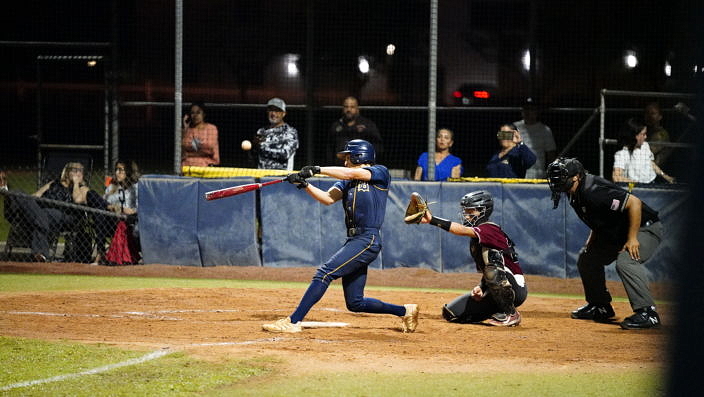 Under the old FHSAA format where all district runnerups automatically qualify for regionals, Pines Charter would’ve had more baseball to play. But now the Jaguars will have to wait.

The new format where only district champions are guaranteed a spot with the other four spots going to the highest-ranked wild card teams based on RPI points, leaves them in limbo. Their 8-13 record is not impressive but their strength of schedule is, thus they were a team right on that 8/9 bubble for a berth and will be at the mercy of how other district tournaments in Region 4 play out this week to see if they make it.

“We were ready to play but it just didn’t happen tonight,” said Pines Charter manager Carlos Iglesias. “The kids were prepared, my coaches did a good job on getting them ready to compete but Belen has had a fantastic season and they were just a better team tonight. Now we’ll just have to sit back and see if we get in as one of the wild card teams and see if our season continues. If we go to the next round we’ll be ready, if not then we have to move on. That’s the way baseball is.”