Doral Headed To 6A Regional Finals Following Win Over Mater 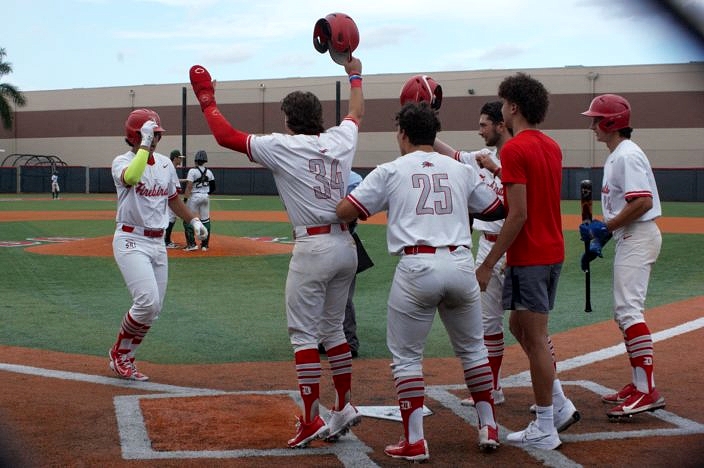 Daniel Restrepo is greeted at home plate by his teammates after hitting a grand slam.

The Doral Academy Firebirds don’t lose at home and the Mater Academy Lions found that out the hard way on Friday afternoon in a 7-3 regional semifinal loss.

That’s not to say the Lions failed to put up a fight, but rather to acknowledge the sheer dominance with which the Firebirds play in front of their home crowd. A 17-1-1 record at Douglas P. Rodriguez Field isn’t an accident. Doral is a well-oiled machine that’s earned the top seed in the region for a reason. They are still young, though, and Ralph Suarez left Friday’s loss thinking that his club could have done more with a tad more experience.

“I was a little disappointed we didn’t score more,” Suarez said. “We had guys in scoring position and I think we could have done a little better job. I think after we had those back-to-back home runs we kind of settled down.

We lost a lot of good players to graduation last year. We have a lot of young players this year that haven’t been at this stage, so it can be a little difficult for them. They’re learning on the fly. We only have two seniors on this team. This whole team basically returns.”

Those back-to-back home runs Suarez mentioned came in the third inning and were really the difference in the ball game. The Firebirds actually broke the tie in that inning by scoring on a wild pitch but it was Daniel Restrepo’s grand slam that tipped the scales. Robert Rodriguez followed up with a solo shot to make it 6-0.

“It felt great,” Restrepo said. “I was confident. I had my team emotionally supporting me. They kept screaming my name, helping me out. I waited for the pitch and did what we work on in practice: swing through.” 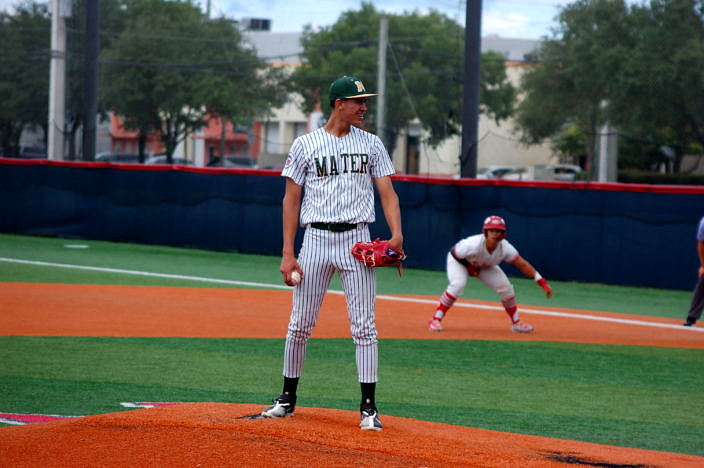 Christopher Sosa got the start for Mater Academy in the regional semifinal.

Christopher Sosa started the game for Mater Academy and fared relatively well through two innings. After a single, two walks and a run scored in the third, Sosa was pulled for one of the most trusted arms in the bullpen, Alex Braida. Unfortunately, Braida didn’t have his usual stuff and hit the first batter he faced, loading them up. He’d surrender both homers, but Sosa would get charged for two of the runs. Riquelme Febles came in next and got out of the inning without giving up another run.

Doral added one more run in the fourth, but Mater Academy knew how to answer this time. A pair of walks set up a three-run homer from Ramily Cordero and the Lions had new life. After pulling off a seventh-inning comeback against South Plantation in the regional quarterfinal, anything was possible. But the back-to-back stunner wasn’t in the cards on Friday and the Lions went down without putting up another run.

“We made a mistake in communication and left some balls up a little high and it’s a short porch here,” Lions manager Humberto Bencomo said. “They hit two out and we hit one and one of there’s was with more guys on base than ours, so we gave up those runs early. That put us behind and we had to play catch up and the catch up didn’t work.” 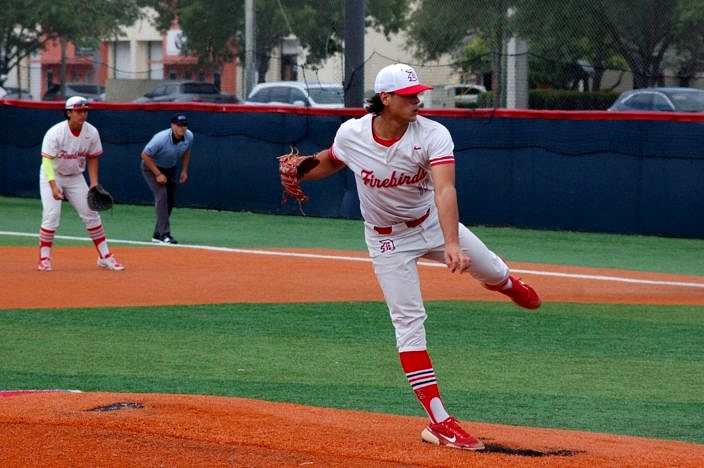 One of the reasons Mater Academy struggled to catch up was Doral’s pitching depth. The Firebirds threw four pitchers on 2-2-3 inning split to preserve arms for the finals. Florida commit Frank Menendez got the start and struck out six batters in two innings. Suarez called the outing a bullpen for the junior left-hander and confirmed that he will be the starter in the championship game.

“With his pitch count situation and getting ready for Dwyer or St. Thomas, our No. 1 hadn’t thrown in seven days,” he said. “We had no choice but to throw him, but we wanted to make sure everybody got work. The unfortunate thing about that is these are high school kids, so sometimes it can be difficult. But we still struck out 14 guys and gave up two hits.”

Jake Gorelick pitched two clean innings of relief, but Keyler Gonzalez ran into trouble with the fifth-inning homer. Michael Torres came in and finished off the game for the Firebirds, striking out five over 2 2/3 inning of hitless baseball. 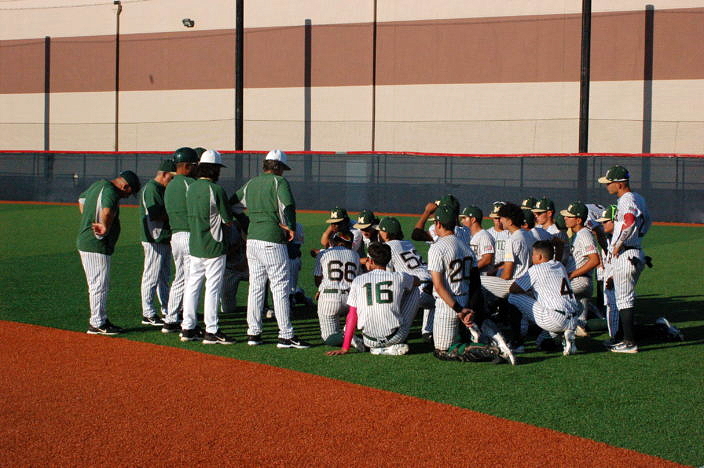 Lions manager Humberto Bencomo addresses his team as their season draws to a close.

It’s not the outcome the Lions wanted, but there’s little to hang their heads over after looking at the strides made from last season’s 3-10 finish. What’s even more encouraging is that there’s a ton of young talent on the team that’s only going to improve with a new staff in place to develop them.

“These guys won three games last year,” Bencomo said. “Now, to win the district and make it to the semifinals of regionals with a lot of freshmen and sophomores, it just sets the bar up for great success in years to come… Our guys are good players, good young guys. I mean, I’ve got an eighth-grader in my starting lineup, so we’re looking good. The future is bright.”

Doral season continues on Tuesday with a home game against the Dwyer Panthers in the regional semifinals. Suarez was able to scout the team a bit as an observer of the Panthers’ 7-3 win over St. Thomas Aquinas, and he likes his team’s chances of getting revenge on the club that ended their season early a year ago.

“Nobody is (easy to beat) at this point,” Suarez said. “Last year’s team was a lot more experienced and a lot more talented and we went over there and laid an egg. The important thing is that they are coming to us and we only have one loss all year (at home). To be honest with you, we’ve had two bad innings all year pitching-wise. One against Heritage and one against Mater Lakes.

Other than that, today was about as bad as we’ve been. We’re really, really good defensively. Anything that’s on the ground, we have a chance at it. This team is pretty fundamentally sound and has pretty good pitching depth for a high school team.”