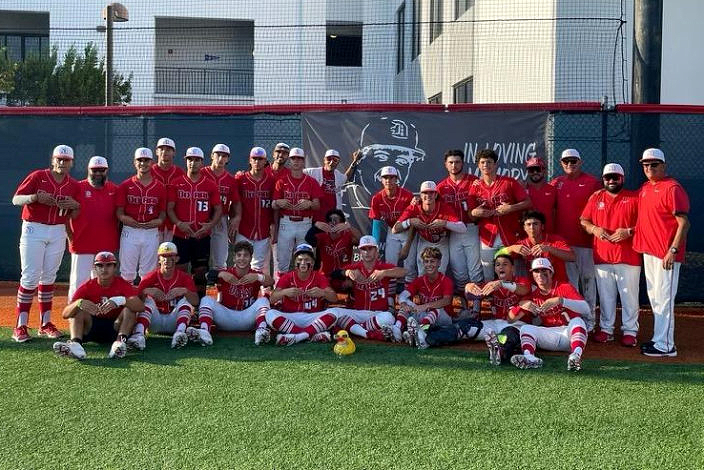 The 2022 Class 6A Region 4 champion Doral Academy Firebirds. Doral makes its third trip to the state Final Four in the past five years.

For the third time in the past five seasons, the Doral Academy Firebirds are going to the state tournament. Tuesday afternoon, Doral made quick work of the Dwyer Panthers to win the Class 6A-4 Regional Championship with a 10-0, no-hit decision to stamp their ticket to the state final at Hammond Stadium in Fort Myers. The Firebirds (24-4-1) also reached the state tournament in 2018 and 2019, finishing as the runners up in the 2019 season.

Doral will face the Sickles Griffins in the 6A state semifinal on Friday, May 20th, at Hammond Stadium. Sickles advanced with a 5-0 win over the Strawberry Crest Chargers to win the 6A-3 Regional Championship.

“This group is doing a great job with how young they are,” Doral Manager Ralph Suarez said. “This is great for the program as we establish ourselves as one of the best teams in the state every year.”

Frank Menendez and Jake Gorelick combined for the no-hitter, in the five-inning contest that was shortened by the mercy rule. Menendez nearly went the distance, striking out nine in four-and-two third innings, and Gorelick came in to record the final out.

Doral wasted little time in taking control, with four runs in the bottom of the first inning. The Firebirds collected nine hits on the afternoon, as Sebastian Berrios went 2-for-3 with a home run to lead the way. Michael Torres was 2-for-2 with an RBI and Jake Santos was 1-for-1 with two RBI.