Fast Start Leads Mater Academy Over Everglades For 6A-15 Title 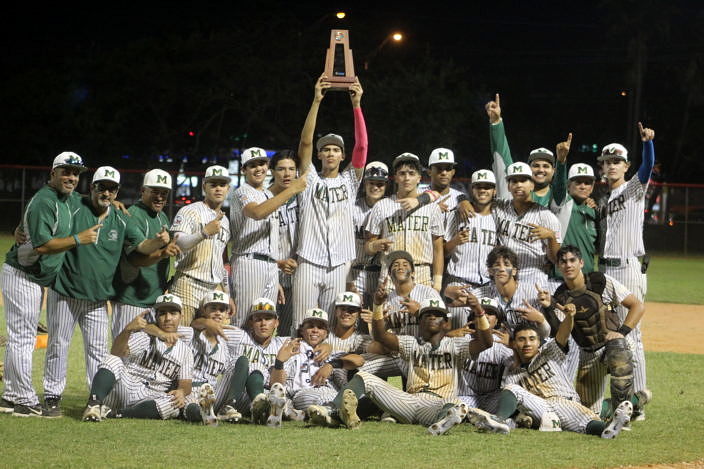 Having won just five games in the last two seasons, 2022 was supposed to be more or less a rebuilding and “get-to-know” you year for Mater Academy and brand new head coach Humberto Bencomo. A once proud program that had brought the school its first state championship in any sport back in 2014 had fallen on recent hard times.

With a young team and many new faces, they were supposed to be building towards 2023. After Friday night, it would appear that Bencomo and his young Lions players have arrived a little early to the party and appear to be ahead of schedule.

That’s because No. 3 seeded Mater Academy, whose 16-10-1 record coming in already had the season being a rousing success, took the field against No. 1 Everglades in the District 6A-15 championship game and, after shocking the Gators by plating six runs in the top of the first, roared to a resounding and decisive 11-4 victory at Alex Fernandez Field in Hialeah.

With a rabid fan base making lots of noise all night long in the packed stands, Lion players stormed to the center of the field to celebrate when the final out was recorded and then raced toward the stands to jump up on the fence to show off their district championship trophy, the first district title for the program since that state championship season of 2014.

The Lions will likely be a No. 4 seed in Region 4-6A and host the No. 5 seed, likely South Plantation, in a regional quarterfinal on Tuesday, May 10 at Westland Gardens Park.

“It’s a puzzle that starts with my coaches and working to get players to buy into a new system and new process,” said Bencomo when asked about the key to this season’s sudden success. “It wasn’t easy at first, something they were not used to, learning fundamentals and discipline and everything that it brings, and the belief that if you do that, then good things will happen. Good things sure happened tonight as we had a dream start. To walk out there and drop six runs on them right out of the box, it allows you to basically dictate things the rest of the game. These players are hungry. They showed up hungry tonight and wanted it. Wanted it really bad.”

Everglades starter Maurice Maiquez struggled right out of the box and never made it out of the first inning before Adrian Sabatier came in to record the final out of the inning. Already trailing 3-0 with the bases loaded and two outs, the last batter Maiquez faced was Mater’s No. 9 hitter Ramley Cordero. Cordero then began what would be a huge night for him when he rocketed a shot down the right field line that was fair by less than a foot.

When the ball rolled all the way to the corner and the right fielder fumbled around with the ball, Bencomo gave him the green light rounding third as he went for what would’ve been an inside-the-park grand slam home run. But Everglades first baseman Christian Miranda fired a strike to catcher Kelven Perera on the relay to cut down Cordero at the plate. 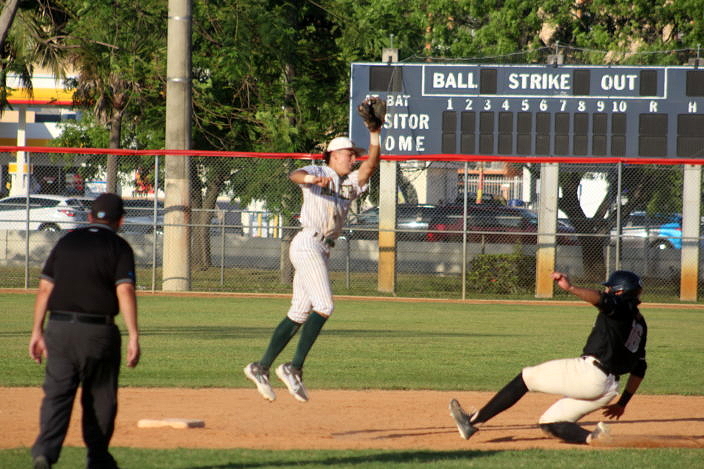 Mater shortstop Ramley Cordero goes up high for a throw from the cater as he tries to cut down Everglades’ Kelven Perera trying to steal.

That’s about the only thing Cordero did wrong as he doubled in another run in the third and had a single and stolen base in the fifth to finish his night 3-for-4 with 4 RBIs and two runs scored.

“My intention was to just come up to the plate and hit the baseball somewhere and wound up knocking three runs in. it was a great start for us,” said Cordero. “I’m here to play. I don’t care if I’m batting, ninth, eighth, seventh, wherever. When it’s my turn at bat, if there are runners on, I’m going to do whatever I have to do to get them in.”

Being down six early was nothing new to the Gators. They fell behind Cooper City 6-0 after two-and-half innings in a semifinal contest on Wednesday and battled all the way back to win it 9-8.

When they immediately rallied for two runs in the bottom of the first, doubles by Leo Miranda and Roydan Perez being the big hits in the inning, it looked like maybe they just might do it again.

But Alex Braida replaced starter Christopher Sosa after that rough first inning and steadied the ship the rest of the way. Braida retired 16 of the next 21 batters and pitched into the seventh inning before giving way to Kevin Roque who recorded the final three outs.

“The team last year was just no good, nobody wanted to come out to our games and look at all the fans here tonight, the stands were packed and that was really cool,” said center fielder Yoancarlos Diaz who also had a big night going 3-for-4 with a double and two RBIs. “We come out here with a brand new team and win the district. It’s all on Coach Humberto over there, taking all the new faces, putting the pieces together and he build a great puzzle. There’s more to come.” 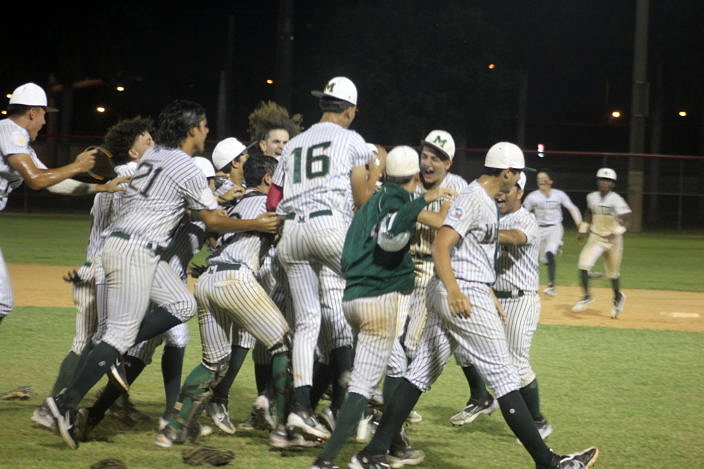 Mater Academy players celebrate on the field after the last out is recorded clinching their first district title since 2014.

While the loss was a tough one for Everglades which was looking for the program’s first ever district title, it did not offset a remarkable turnaround season that saw the Gators go from 6-8-1 a year ago to 17-6 this season. As a result, the Gators will easily qualify as a wild card entry in next week’s regional playoffs marking only the second time in program history (2014 being the other) that they play in the regional round.

“You can’t keep falling behind by six runs in a game and expect to come back and unfortunately that was the case tonight,” said Everglades manager David Monge. “We dug ourselves a big hole again and give Mater credit, they played well to build that early lead and then didn’t allow us back in it. They’re a very good team and deserve what they got tonight. I’m proud of the season we’ve had. To go from where we were a year ago to now making the regional playoffs for the second time in program history is something to be really proud of. We would’ve loved to have brought home the district trophy tonight but at least we are still playing next week.”