Gulliver Takes Down Pace In 3A Regional Quarterfinal

Gulliver’s Chris King is met at the plate by his teammates following a three-run home run in the first inning.

The Gulliver Prep Raiders (17-9) got the job done on the road Wednesday night with a 6-3 victory over the Monsignor Pace Spartans (21-6) in the 3A regional quarterfinals.

“The boys are ready to go. The Road Raiders,” Gulliver manager Chris Leon dubbed his team after the ballgame. “They’ve been waiting for this opportunity all year. We came in here with something to do and we did it.”

The Raiders jumped out to an early lead thanks to a three-run homer over the left field fence in the first inning by right fielder Chris King. Center fielder William Bettridge added an insurance run with another home run to left, and Gulliver firmly took control of the game with five innings to spare. The long ball might not have been the plan all along for the Raiders, but a good approach tends to pay off in the moments it matters most.

“Our plan was to be aggressive 0-0 and not get under anything to let them make plays,” Leon said. “We patented a saying for our team which is ‘low fly balls,’ and that kid hit the lowest fly ball of the season over the fence. I’m very happy for Chris King, he’s a staple in our lineup, and then Will’s been doing that in big moments all year.

That kid is going to be playing Division I football (as a kicker for Virginia) next year. He loves baseball and is my starting center fielder for a reason. That extra run was huge and energy is everything in this game. Obviously, those runs helped us out early, and with Brixton Lofgren on the mound we always have a chance.” 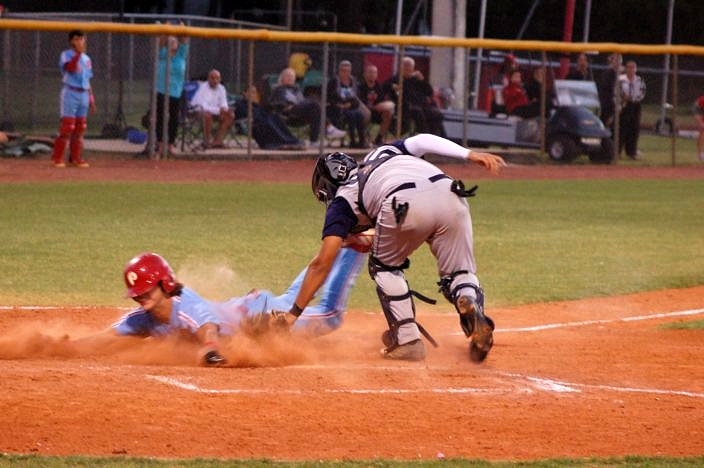 Gulliver stops Pace from scoring on a would-be sacrifice fly with a nice play at the plate in the fourth.

Four runs were exactly enough for Brixton Lofgren, who threw a complete game in Wednesday’s victory. He only made one major mistake on the evening — a three-run homer by Arquiemedes Barrios for Pace in the fourth — but he stayed calm and dominated throughout the rest of the night. After trusting him for over 40 innings in the regular season and district playoffs, Leon’s come to expect dominance from Lofgren.

“(Lofgren’s) the kind of guy that’s built for these moments,” he said. “We’ve been holding his innings and giving him rest, and if I were to try and take him out before his pitch count he would probably have had some words for me. That kid, when he’s on, he’s one of the best pitchers in Miami-Dade county. I’ve said it and I’ll continue to say it: Brixton Lofgren deserves his credit.”

Like any good ace, Lofgren wanted the ball when it mattered most for his team. He struck out five and held Pace to just three hits and a walk.

“I feel great,” Lofgren said. “We haven’t been to regionals often, but we have great pitching and great defense and outs are outs on this field. I can’t ask for anything else… I would’ve pushed myself to the limit, whatever it was. I wanted to finish that game. I wanted it in my hands and no one else’s.” 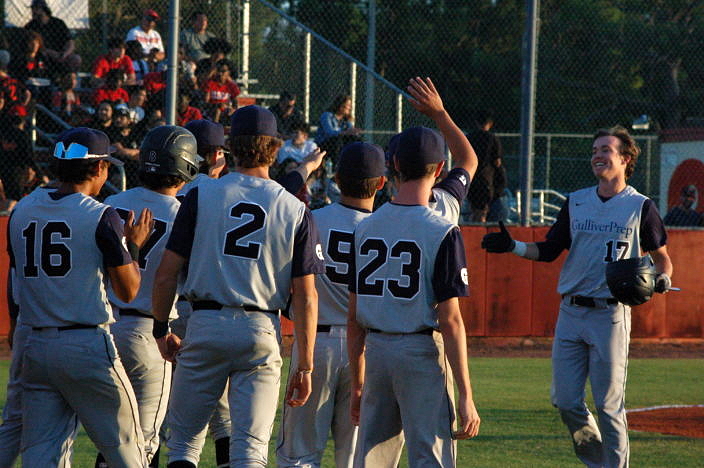 William Bettridge meets his team after giving the Raiders a 4-0 lead with a solo shot in the second.

Even Spartans manager Tom Duffin couldn’t help but tip his cap to Lofgren after the stellar performance. Duffin’s come to expect more out of his club after seeing the year-to-year improvements, but things didn’t click the way they usually do on Wednesday.

“It was just one of those nights with baseball,” Duffin said. “Their pitcher commanded the zone with three different pitches and kept our hitter off-balance. They jumped up early and we always seem to be playing catch up. So, hats off to Gulliver, they outplayed us tonight and were the better team tonight.”

The tone seemed to be set early after the Raiders jumped out to the 3-0 lead in the first and Pace never managed to fully gain the momentum back. Barrios’ homer could have served as a turning point, but Gulliver still held the lead after throwing out a runner at home the play before. That runner could’ve made it a grand slam to tie the game had he not gone at all.

On the mound for Pace, John Caballero worked through all the notable portions of the game. He lasted 4 2/3 innings and struck out three while giving up six runs (three earned) on five hits and two walks. Sebastian Valdez struck out two and walked four in one inning of relief, and Joseph Gamiz finished the last 1 1/3 innings with a clean record.

“I don’t think you saw the best of John Caballero today,” he said. “I’m not going to take anything away from Gulliver. They jumped on him and he sort of settled down a bit, but we could never get a tie game or a lead for him. I wasn’t his best outing, that’s for sure.” 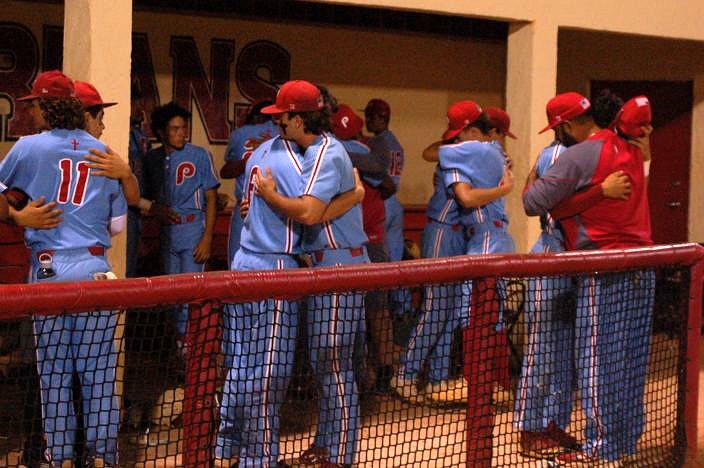 It’s an emotional night for the Spartans as their 2022 season comes to an end earlier than expected.

It’s a disappointing end for the Spartans, but there are enough returning players to make this a learning moment. It’s the second straight year that Pace has exited the playoffs in the first round of the regional tournament and it’s now been four years since the historic program has made it to states. Duffin’s hope is that this loss will stick with the underclassmen and juniors who will lead the team next year.

“For the underclassmen, just remember what this feels like,” he said. “You’ve just got to work harder. Work hard to be better, more disciplined hitters. And again, there were some young players out there tonight. Our shortstop is a sophomore, center field is a sophomore, we have a junior in right field, a junior at third base and a junior catching. I’m not giving excuses, but you’ve got to learn from these games how to handle pressure and how to handle big moments.

“Hopefully, they take this into the summer and come back stronger next year. You just feel for the seniors, all eight of them, five of which are going to get t change to continue their baseball careers. It’s just someone had to lose and it was us, unfortunately.”

For Gulliver, the season continues on Saturday at 1 p.m. on the road against North Broward Prep (19-9). The winner faces the victor of the Westminster Christian and Florida Christian game.