Key West Walks Off St. Brendan In the Eighth For 4A-16 Title 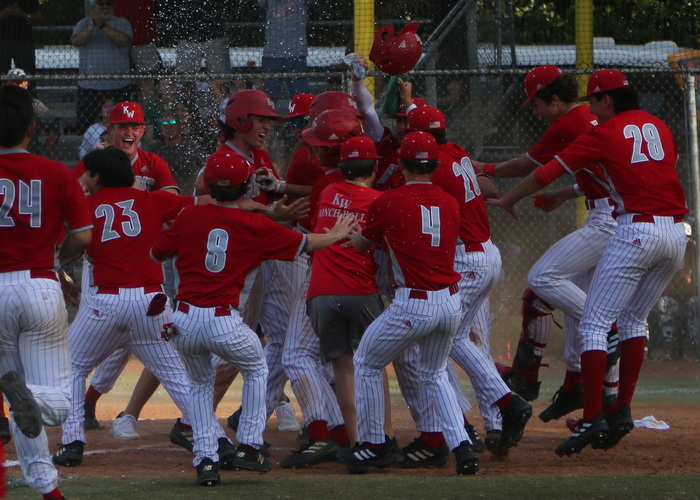 Key West celebrates scoring the winning run on Friday in a dramatic 7-6 walk-off win for the District 4A-16 championship. Photo by Glenn Sattell

Baseball is a crazy game, but it always seems to come down to which team throws strikes. That was never more evident than on Friday afternoon at Killian High School. That’s where Key West captured the District 4A-16 championship with a walk-off 7-6 8-inning win over St. Brendan in a battle of Miami-Dade top 15 Power Ranked teams.

“Yes, that’s always the difference in the game, said St. Brendan manager Jorge Robles, who saw his pitching staff surrender 11 walks. Four of those scored, including the game-winner.

Key West’s Preston Herce opened the bottom of the eighth inning, in a 6-6 tie, with a walk. He moved to second on a single by Trevor Zuelch and was advanced to third by a perfectly executed sacrifice bunt from Jack Haggard before scoring the game-winner on a wild pitch.

“You throw strikes, you have a better chance to win,” said Robles, who saw his No. 15 Sabres fall to 13-9 for the season. But perhaps it wasn’t the Sabres’ final game of the year depending on whether or not they qualify as a wild card for regionals.

“We’ll continue to work tomorrow and we’ll see from there,” Robles said.

St. Brendan appeared to have things well in hand after scoring four runs in the first inning then building a 6-1 lead into the bottom of the fifth inning.

“It was a rough start for us, making errors, which we normally don’t do, said Key West manager Ralph Henriquez, whose No. 5 Conchs improved to 21-6. “Normally all year we’ve been pitching and defense. Later on in the year we started swinging the bats. We gave up those four runs in the first inning, but the kids hung on and we started adjusting to the field a little bit and making things happen.”

The Conchs are used to playing on their home field, which is turf, and even traveled to a couple of away games with turf fields.

“And then we just kept plugging away and do what we had to do to get back in the game,” Henriquez added. “This is what these guys have done the second half of the year, finding ways to win all the time.”

By contrast to the free passes that Sabres pitching issued, the Key West staff was much stingier, giving up only three.

Conchs starter Andris “Lucky” Barroso went five innings and after surviving four unearned runs in the opening frame, settled into a pretty good groove the rest of the way.

“Lucky did a good job; he just didn’t get any breaks,” said Henriquez. “We made a couple of throwing errors that put him in a tough spot. But after that he just settled down. His pitch count got up a little bit and Jacob Burnham came in and did an excellent job.” 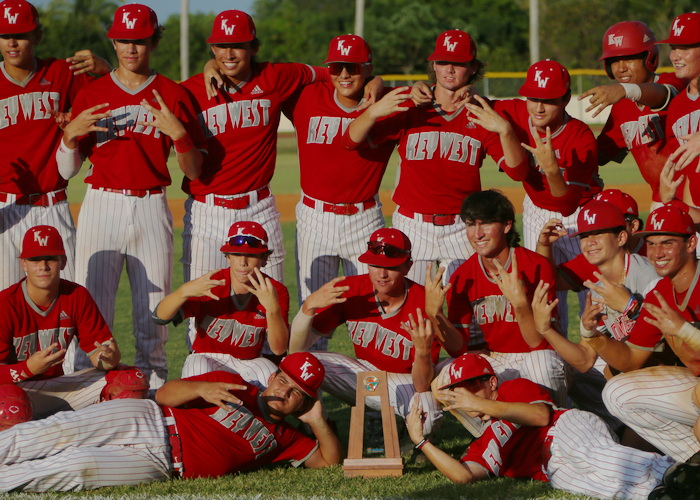 Barroso, who yielded five hits and just one earned run, said he had no problems pitching in 90-plus degree heat with high humidity in the middle of the afternoon.

“We live in Key West, we’re used to it,” said Barroso, who had little doubt that his team would rally from the early deficit. “At first yes, but once they started hitting the ball, there was no doubt at all.”

A third-inning RBI single by Zuelch, scoring Anthony Lariz, who walked, was the only run the Conchs could muster until getting back into the game with three runs in the fifth to cut the Sabres’ lead to 6-4, with the help of three walks and an error.

Lariz again walked and scored, and both Noah Burnham and Herce crossed the plate after delivering singles. The Conchs tied the game at 6-6 an inning later with more free bases. Key West made use of three walks in the inning to knot the score on a two-run single by Haggard that scored both Jose Perdigon and Herce. 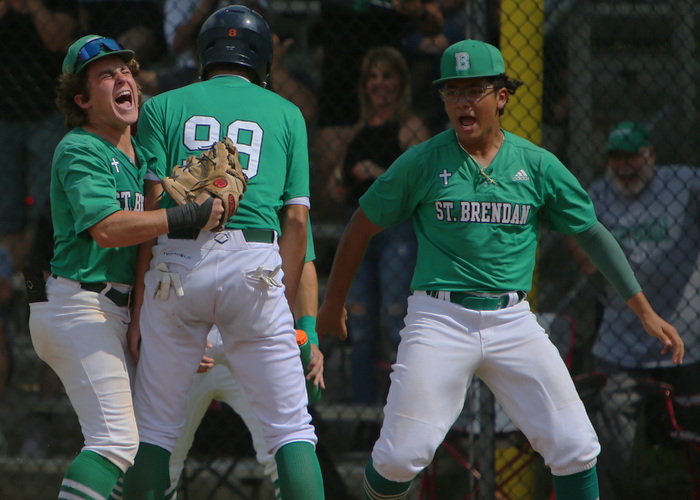 “As a team we never really gave up,” Jacob Burnham said. “We knew we were going to put runs up on the board. It was just a matter of when. Lucky did a great job of battling. He did everything he could.

“I came in just trying to give the team a chance to win, and they ended up doing it.”

But until the fifth inning it was the Sabres seemingly in control. Joseph Contreras delivered a two-run single in the first inning while Gaby Garcia, Luis Suarez, J.C. Garcia, and Vince Van Hemert all scored to give St. Brendan a quick 4-0 lead.