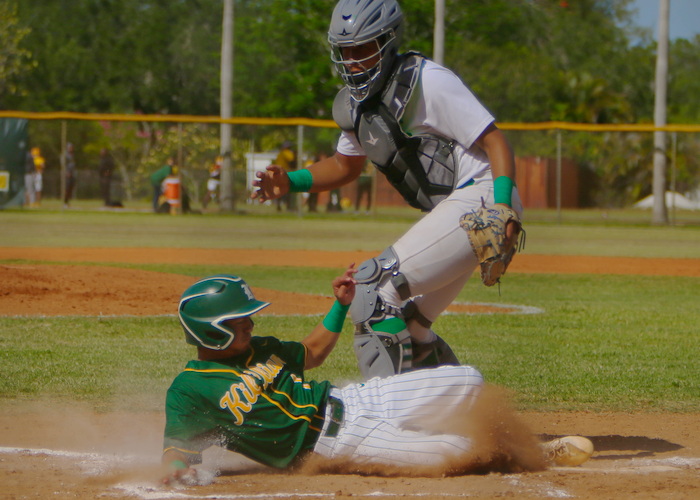 Killian adds another run in their game with St. Brendan on Wednesday. Photo by Glenn Sattell

Killian and St. Brendan played into the third inning on Wednesday before a second lightning delay postponed their District 4A-16 semifinals playoff game at Killian High School. That’s where they’ll pick it up again at 3:30 p.m. Thursday, with St. Brendan holding a 7-4 lead.

The start of the game was delayed 30 minutes by lightening and it seemed to affect both starting pitchers. Neither recorded more than one out in the first inning before being lifted after giving up four runs. It was a 4-4 game after one inning of play.

“Yes, ours was ready to go when the (game was supposed to start),” said St. Brendan manager Jorge Robles. “On the delay, he didn’t come back the way he’s supposed to. So, I think it affected him. There was no rain, but lightning is close. So, you’ve got to be safe with that.”

Despite playing on its home field, Killian was the visitor in the game and put up the first 4-spot. But they saw that advantage go out the window in the bottom half of the inning.

“Both (starting) pitchers struggled,” said Killian manager Hernan Adames. “You’re talking about high school kids, the emotion, the adrenaline, they don’t know how to control that. And it showed for both teams.”

The Cougars got on the board first by a bases-loaded walk to Alexandro Forte that scored Alejandro Sanchez, who laced a one-out double. Maximus Orbeta singled home Jose Lopez, and Tyler Tamargo punctuated the inning with a two-run single, plating both Forte and Orbeta, who along with Tamargo went 2-for-2 on Wednesday. 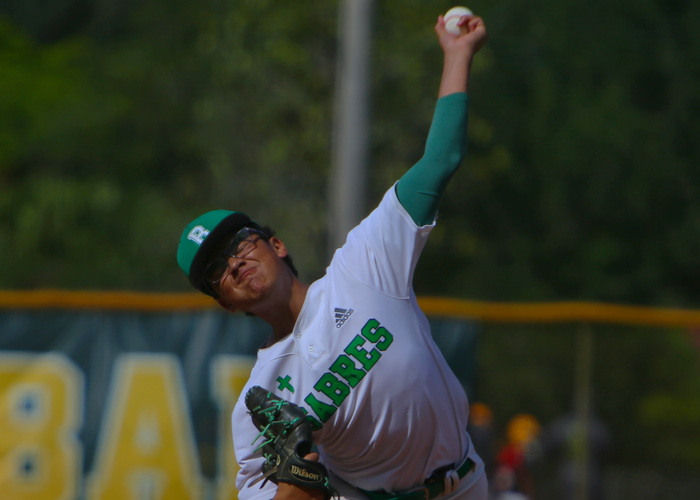 But the Sabres answered with four runs in the first and three more in the second. Luis Suarez delivered an RBI-single that brought home Joseph Valdes as the Sabres battled back in the first inning. Then J.C. Garcia came through with a two-run single, chasing home Gabe Garcia, and Luis Suarez. Vincent Van Hemert tied the game with an RBI single, scoring J.C. Garcia.

But the fireworks weren’t over for St. Brendan. The Sabres added a three-spot in the second inning when Max Alvarez, Valdez and Gabe Garcia opened the inning with consecutive singles and the trio eventually scored to give St. Brendan a 7-4 lead.

The Sabres will come in to bat in the bottom of the third inning when the game picks up on Thursday.

Despite the deficit, Adames said he knows the game is still up for grabs. 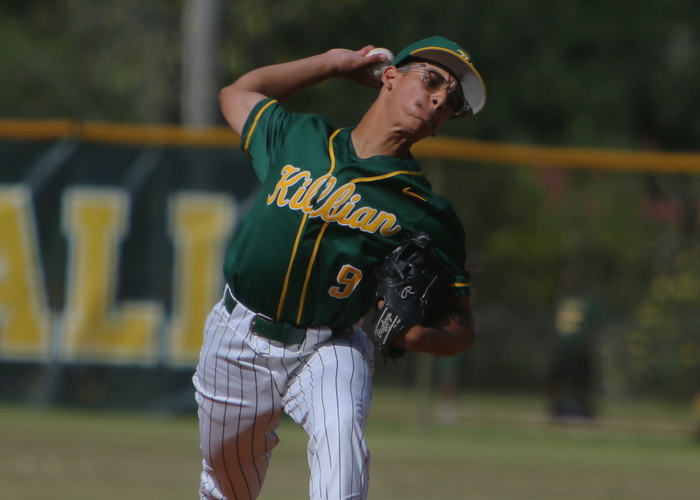 Killian pitcher Paul Gutierrez fires to the plate in the early innings on Wednesday. Photo by Glenn Sattell

“This game is going to be very interesting,” Adames said. “Both teams are swinging the bat. There’s high energy on both teams. So, we’ll see tomorrow who can really close the deal.”

Though he used three pitchers on Wednesday, Adames, like Robles, said he still has plenty of pitching left to compete on Thursday.

In fact, Adames may get his best pitcher back. Cougars’ ace Aiden Pinto was scheduled to start on Wednesday but has been ill the last couple of days. Adames is hopeful the junior left-hander can return on Thursday.

“Maybe this is God intervening for us, that tomorrow our ace will be ready to go.”