Mater Academy Rallies In 7th To Walk Off South Plantation 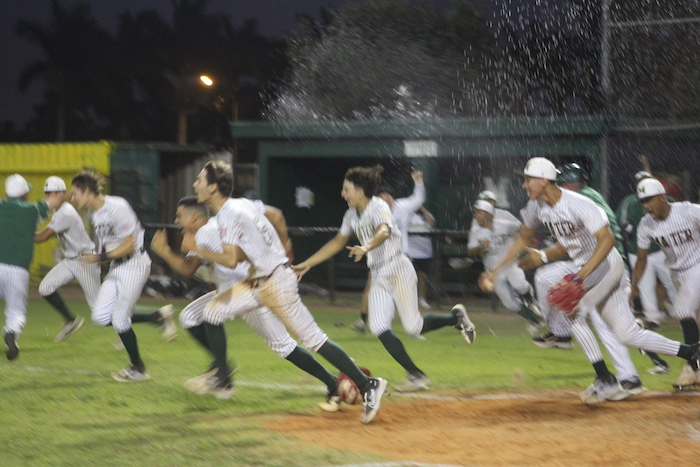 Mater Academy players storm the center of the field in celebration following the game-winning run.

Depending on which side you were on, it was a moment of tremendous euphoria or unimaginable devastation.

It was the moment that Mater Academy’s Alex Breida executed a perfect wraparound slide at home plate to avoid a tag by the catcher in the last of the seventh to give the Lions a dramatic come-from-behind walk-off 3-2 victory over South Plantation in a Region 4-6A quarterfinal contest at Westland Gardens Park in Hialeah Gardens.

Mater Academy players rushed out to the middle of the field to mob their hero for the moment, Diego Garcia who, with Breida on second, had just laced a two-out ground ball in between shortstop and third base into left field. Breida flew around third and barely beat a great throw to the plate ending the game.

On the other end of the spectrum, there were the South Plantation players sprawled out on the ground in despair, having to be picked up by their coaches, virtually inconsolable.

Thanks to an absolutely brilliant outing by pitcher Brady Reinhart, the Paladins entered the last of the seventh with a 2-0 lead and were three outs away from recording the first regional playoff win in the 51-year history of the program.

And then it all fell apart as the Paladins committed two crucial errors in the field to open the inning that ultimately led to three unearned runs for the No. 4 seeded Lions who now advance to Friday’s regional semifinals where they will travel to take on No. 1 Doral Academy at 4 p.m.

“This is crazy, what a group of kids,” said Mater Academy manager Humberto Bencomo. “They just don’t stop and refuse to let this thing end. We have a bunch of freshmen and sophomores out there and we’re doing now what I thought we’d be doing in a few years. Absolutely amazing, I can’t be more proud of them. We’ll go into Friday against Doral as an underdog but that’s just where we want to be.”

Bencomo watched all game long from a quiet dugout as Reinhart was virtually untouchable. Through six innings he had faced just two batters over the minimum as Eduardo Morales (two-out base hit to center in the first) and Ramly Cordero (one-out infield single in the sixth) had been the only two Mater baserunners the entire game, neither reaching second. 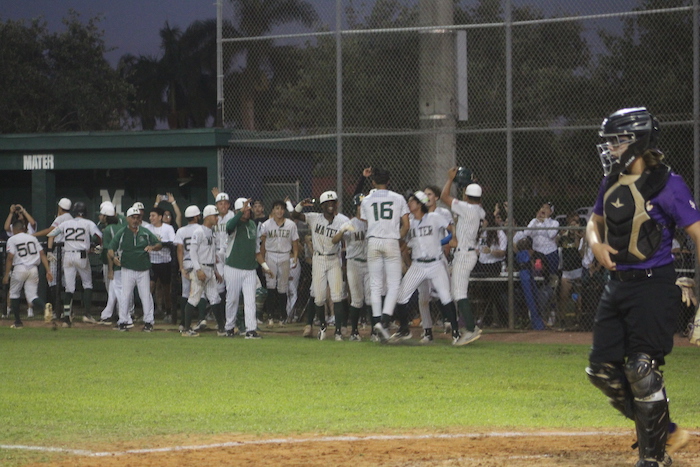 Christopher Sosa (16) is greeted by his excited Mater Academy teammates after scoring the tying run in the last of the seventh.

When Reinhart struck out Morales to open the seventh, the Lions appeared to be just two outs away. But the South Plantation catcher trapped the ball on the swinging third strike and had to throw down to first to get Morales. But the throw went wide and Morales was safe.

Christopher Sosa then came up and hit a routine ground ball to second that had 4-6-3 double play written all over it. But instead, an error left runners on first and second with no outs. A passed ball then advanced the runners to second and third as the Mater dugout was going crazy with excitement. They went even crazier when a wild pitch then brought the runner from third home and Sosa down to third.

With the infield in, Alex Mesa then grounded in between first and second for an infield hit with Sosa holding at third. Eden Nalin then hit a fly ball to right deep enough to allow Sosa to tag up and come home tying the game. Just as important, Breida, who pinch ran for Nalin, went to second on the throw home trying to get Sosa to get himself into scoring position.

After Dylan Fernandez struck out for the second out, Garcia then stepped up and drilled his shot to left.

“There was definitely a little bit of pressure but I knew I needed to go up there and make things happen,” said Garcia, one of only two seniors on an otherwise very young roster. “I couldn’t rely on anyone else, it was up to me. I trust myself more than anybody else. I had an 0-1 count and was looking fast ball and turned on it and got it through the hole. When it went in to left field, I knew we had won. This is the first time I’ve ever done any like this, an amazing moment and I’m just so excited that we’re moving on.”

Incredibly, Breida is a PO (pitcher only) and had not gone in as a pinch runner all season. But there he was, representing the winning run.

“As soon as I saw that ball go into left field, I’m digging like I’ve never dug in my life,” said Breida. “I was flying around third as hard as I could, saw the catcher on one side of the plate so I knew where the throw was coming from so I went down low for a wraparound slide to avoid the tag. Our team never stopped fighting. We believe in each other and we weren’t going to let this ride end today.”

While Reinhart was pitching his gem, Mater starter Kevin Roque was getting the job done as well, matching Reinhart’s goose eggs through the first four innings. But then came the top of the fifth when the Paladins, who finished their remarkable turnaround season 18-7, struck for two big runs. Both came with two outs when, with Dan Swirsky on second, Dylan Schwam and Reinhart hit back-to-back RBI doubles to right center. 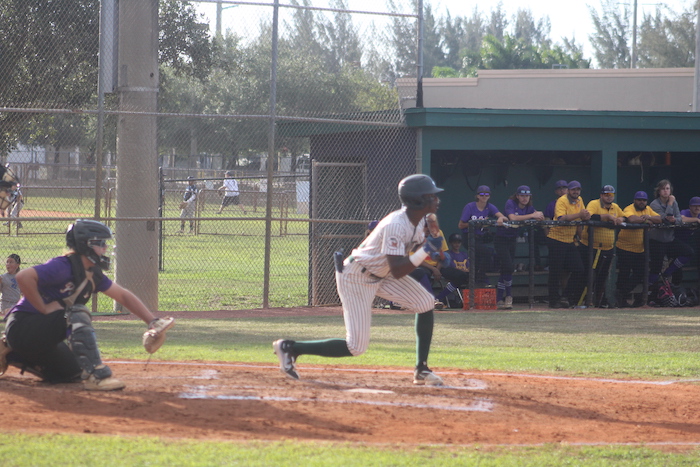 Sosa relieved Roque after five and kept the Paladins from giving Reinhart any more breathing room by recording six-up and six down to keep it at 2-0.

As if there wasn’t enough heartbreak on the South Plantation side, manager Trevor Chang-Leung had to say goodbye to eight seniors, all starters, who knew this was their window to possibly make a deep historic run.

“In seven years this is the toughest loss I’ve had to deal with without a doubt,” said Chang-Leung, himself barely consolable. “I’m heartbroken for Brady, he pitched his heart out tonight but unfortunately we let him down defensively in that last inning. Just routine plays that didn’t get made, there’s no other way to sugar coat it. He deserved better. But I’m still proud of our kids for the season we had and while I’m heartbroken for all of them, I really feel bad for those nine seniors because they won’t get another chance.”