Miami Springs Falls To Island Coast In Region 4A-4 Final 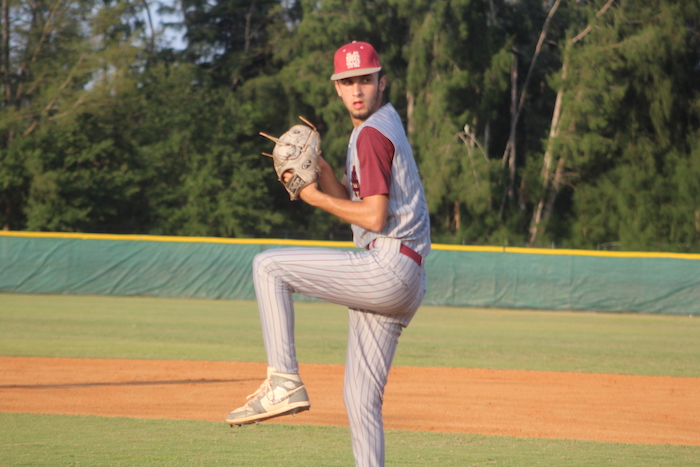 After battling their way through a pair of tough regional road victories, that road finally hit a stop sign for the Miami Springs baseball team on Tuesday night.

The No. 5 seeded Golden Hawks, after avenging a district championship game loss to Mater Lakes by beating the Bears in a regional quarterfinal game and then overcoming a hostile environment to knock off top seeded Key West in a semifinal, could not turn the trick for a third time.

A three hour trip to the west coast ended in great disappointment as a team that had spent much of the season as HSBN’s No. 1 squad in the Miami-Dade power rankings and clearly had its sights set on the program’s first-ever state championship, fell to Island Coast 4-1 in a Region 4-4A final at Island Coast High School in Cape Coral.

The Gators (19-8) were playing in a regional final for the first time in the young history of the program which began play in 2009 and now advance to a Class 4A state semifinal where they will face off against Live Oak Suwanee on Monday, May 23 at 4 p.m. at Hammond Stadium in Fort Myers.

“That’s a good team over there, they came in with 28 home runs as a group and we might’ve come out a little flat,” said Miami Springs manager David Fanshawe. “They got an early run us and got all of the momentum. It definitely appeared that we came out a little flat and the biggest issue might’ve been that we might’ve emptied our tank emotionally the past couple of games. That Mater Lakes game that we won in a rematch and then all the way down to Key West to win in front of that crowd and battle through all of that, it can take a toll. A four hour trip down to Key West, then another three hour trip today and then having to beat another good team. It can wear you down.” 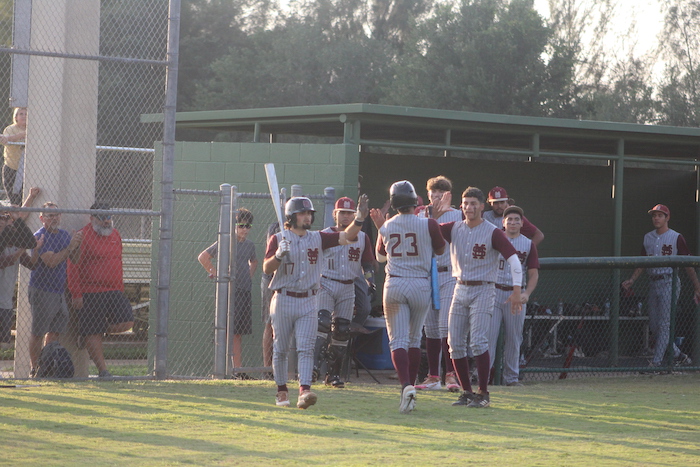 Abdriel Delgado (23) is congratulated by his Miami Springs teammates after scoring what would turn out to be the team’s only run of the night in the second inning.

What really wound up wearing Springs down on this night was Island Coast starting pitcher Kevin Martinez. The junior who is committed to Flagler College in St. Augustine was, with the exception of a brief hiccup in the second inning, dominant from the moment he took the mound until he handed the ball to reliever Dylan Masters who recorded the final three outs in order in the seventh.

Martinez kept Springs off balance for most of the night, staying ahead in the count. Even when the Hawks did connect a few times, they were reminded that perhaps the baseball Gods weren’t with them on this night as they hit it right at a Gator or a Gator fielder made a sparkling defensive play.

“It seemed like every time we hit the ball right at them all night,” said Springs senior left fielder Abdriel Delgado. “A really frustrating night and frustrating end to the season. We really thought we had the team that could take it all the way.”

After falling behind 1-0 after an inning, the Hawks (21-6) put the only three hits they got all night off of Martinez together right in a row – one out singles by Delgado, Anthony Ruiz and Keyber Delgado. Jordanny Gonzalez then hit a high chopper to shortstop for a 6-3 putout as Delgado scored from third and the other runners advanced. After Jesus Peña was hit by a pitch to reload the bases, leadoff hitter Ruben Gandarilla came up and popped out in foul ground to third base to end the inning in what would turn out to be Springs’ first and final scoring chance.

The only other two Springs baserunners the rest of the night were Gonzalez and Jason Torres, who both drew leadoff walks in the fifth and sixth innings, respectively.

After Island Coast re-took the lead with an unearned run in the bottom of the second, first baseman and No. 3 hitter Jake Mueller led off the bottom of the third with a towering solo home run over the left field fence off of Springs starter Jordan Vargas who battled hard on this night but did not have his best stuff. 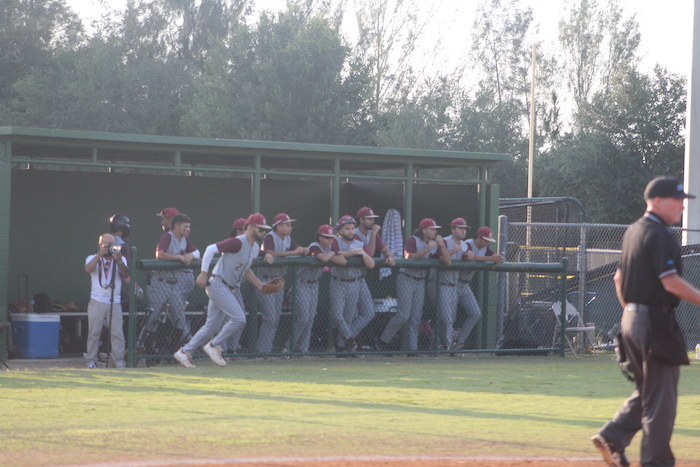 Island Coast then scraped across another run in the bottom of the fourth on a Boe Rodriguez RBI single to increase the lead to 4-1 and, with the way Martinez was dominating, the Hawks were pretty much done.

“In my first at-bat, I didn’t get a single fast ball so I had a hunch he (Vargas) might try and sneak one past me with that first pitch,” said Mueller, an Alabama commit who now has eight homers on the season. “I got one middle-in, was ready for it and got all of it.”

Despite the disappointing night, Fanshawe was not about to let a regional final loss ruin what was otherwise a great season for his team.

“An unfortunate loss and I know how crushed the kids are right now but it doesn’t offset the great season we had,” said Fanshawe. “What it reminds you about again is how really tough it is to go all the way and win it all. This loss is not a symbol of how our year went. I think we had an unbelievable year and a lot of good things came out of it.”