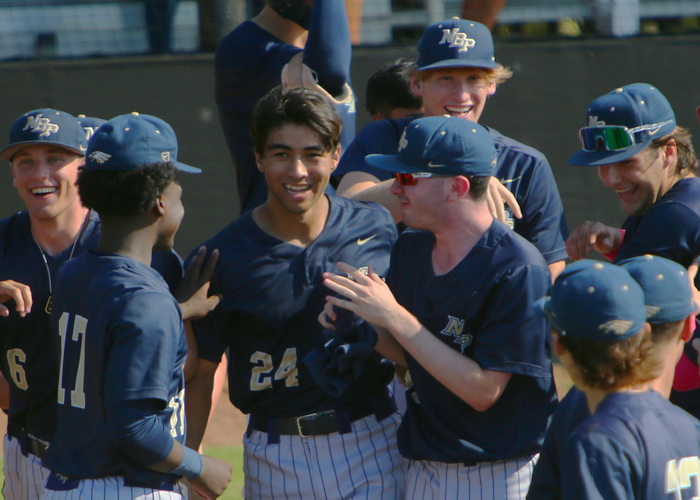 Jonathan Xuereb (24) hit three home runs for the Eagles in their 14-12 win over Westminster Christian on Tuesday. Photo by Glenn Sattell

Seven different players combined to hit 11 home runs for North Broward Prep and all were needed to hold off Westminster Christian, 14-12, in a Tuesday afternoon slugfest for the region title. The Eagles (21-9), ranked No. 7 in the Broward Power Rankings, advance to Fort Myers to try for a second consecutive state championship.

It was an amazing display of power, especially in the fifth inning when the Eagles hit six homers and scored seven runs to extend their lead to 11-3. Coming into the game, North Broward Prep had hit 10 homers for the season. They more than doubled that on Tuesday, aiming for the short right-field fence that measured 260 feet.

Jonathan Xuereb led the way with three homers, doubling his total output for the season.

“It was unreal,” Xuereb said. “When we got here, we saw that fence, that short porch, so everybody was just thinking, hit it to right field. We didn’t even hit most of our home runs that way. They went the other way, too. It was truly amazing. I can’t even get over it.”

He was part of the six-homer seventh inning that seemed to break the game open.

“I’ve never seen that in any game,” Xuereb said. “I’ll never forget this day. That was crazy.”

It didn’t matter what Westminster Christian pitchers threw at him, Xuereb hit them all out – fastball, curveball, change up, he belted one of each over the fence.

“I was studying their pitchers before (batting),” he said. “I knew what pitch was going to come and I waited on that pitch and I just got it. I did my thing with it.”

Nathannael Coupet was one of two Eagles players to hit a pair of home runs; Nick Koorse also belted two homers in the game. Coupet said that he and a few of his teammates got pretty excited about playing at Westminster Christian after using Google Map to discover the right-field fence was 240 feet from home plate. But home runs were flying out the other way as well. 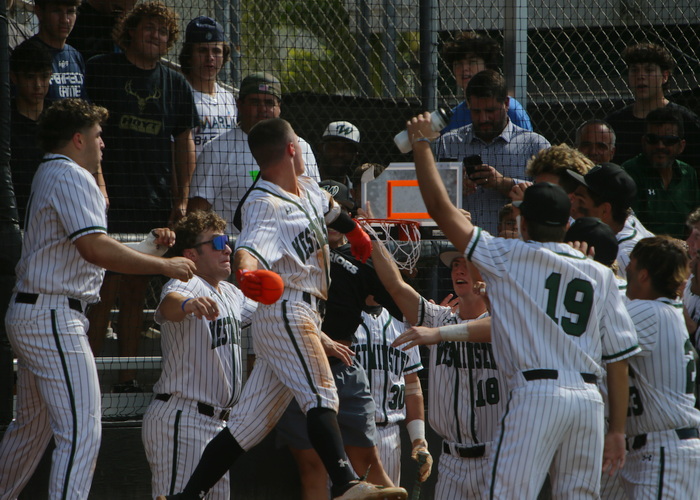 Westminster Christian had their own home run celebration. Photo by Glenn Sattell

When asked if he thought that the right-field fence was actually 240 feet away Coupet said, “It’s pretty short.”

The slugfest was a complete opposite of last year’s region final in which the Eagles earned a 1-0 9-inning victory on their journey to the state championship.

“We adjust our approach depending on the field we’re playing,” Coupet said. “It worked today. It usually does.”

But give credit to Westminster Christian (20-8, ranked No. 10 in the Miami-Dade Power Rankings), they didn’t hang their heads after falling into an 11-3 hole late in the game.

“One thing, we will never back down from a fight,” said Westminster Christian manager Emil Castellanos. “The game ain’t over until the last out. And we showed it today. A lot of teams, I feel, might just throw in the towel. But not us. We showed that we’re always going to fight.” 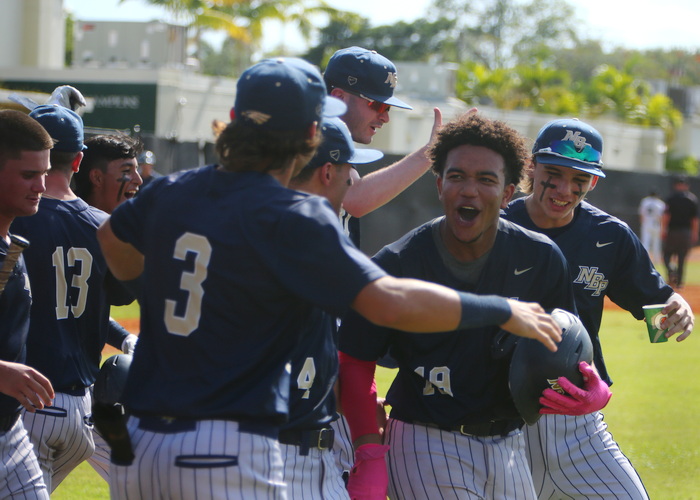 The North Broward Prep Eagles are headed to the state tournament for a second consecutive season after winning the title last year. Photo by Glenn Sattell

The Warriors battled back, answering the Eagles’ 7-run fifth inning with six runs of their own, including two of their four home runs. D’Angelo Ortiz belted a solo shot and Sal Stewart crushed a two-run homer. When the dust settled, it was an 11-9 ballgame heading into the sixth inning.

“I haven’t seen this many home runs on this field in a long time,” Castellanos said. “But that’s just the game of baseball. You’ve got to tip your hat. They’re a good team. They came into our backyard and we were 15-1 coming into this game at home, they got us today.”

The fireworks were far from over. Gian De Castro hammered a two-run homer and Koorse delivered a solo blast to give the Eagles a 14-9 advantage heading into the bottom of the seventh inning. 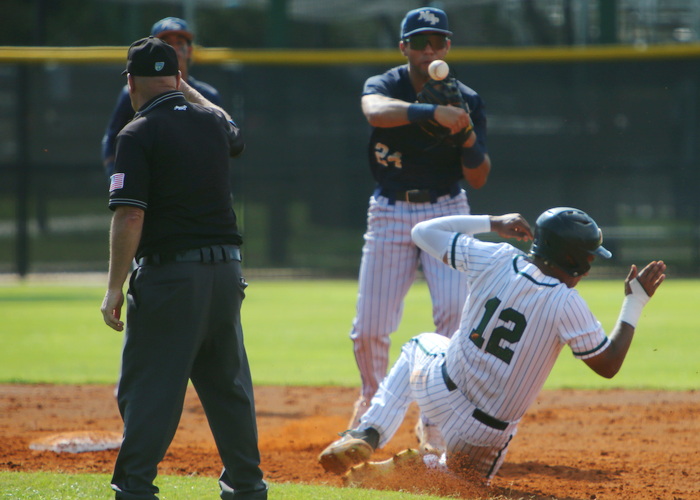 North Broward Prep attempts to turn a double play in its 14-12 win over Westminster Christian on Tuesday. Photo by Glenn Sattell

That’s when Warrior Rene Ramirez made things interesting again with a three-run homer. But that’s when Eagles’ reliever Jensen Secular recorded the final out.

“We used to play on a pretty small field before we redid our ballpark and I’ve seen some 5-6 homerun games; nothing like this,” said North Broward Prep manager Brian Campbell. “It was unbelievable. Seemed like, both teams, anytime anybody touched the baseball it was leaving the park. It was a pretty amazing game.”

The veteran Eagles squad now heads to Ft. Myers to defend their crown.

“Yeah, last year was pretty new for all of us,” Coupet said. “This year we know what we’ve got to do and we know the teams that are over there.” 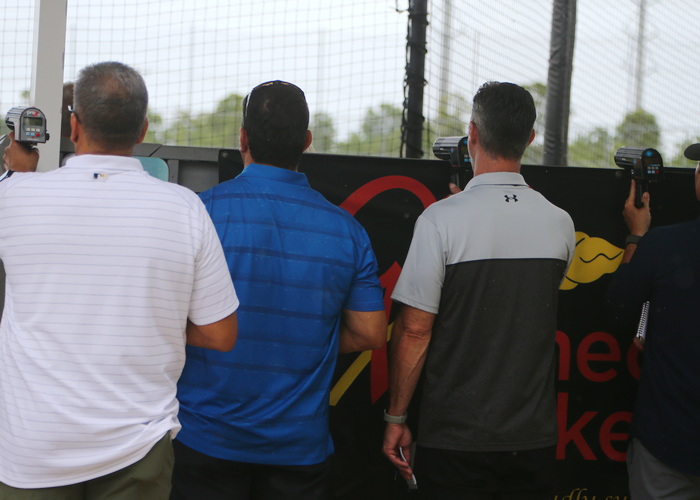 The scouts were out in force Tuesday for the region finals at Westminster Christian. Photo by Glenn Sattell

Xuereb said that team chemistry has been a major key to the Eagles’ success this season.

“Everybody is so connected,” he said. “We hang out outside of school. We just have that chemistry. A lot of people say that, but our team actually has that. We’re all good friends and when we come on the field, we’re just so loose with each other that even if the other (team’s) fans or team is chirping at us, it doesn’t affect us. So, that really helped us in this game.”

Campbell said he couldn’t be prouder to return for another run at a state title.

“To get back to state was one of our goals, obviously, we want to win there,” he said. “I’m just so proud and so happy for these kids. This team won for each other today and that’s just a sign of a special team.”