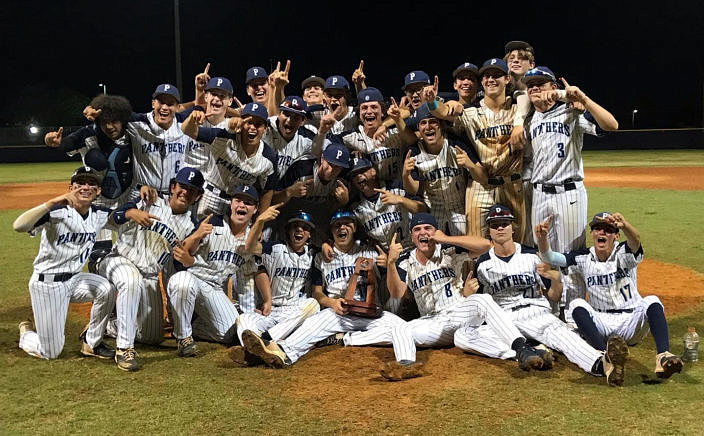 The 2022 District 7A-16 champion Palmetto Panthers. *Photo from @mpshbaseball.

The Palmetto Panthers rallied back for a comeback victory in Thursday’s District 7A-16, as the Panthers came back for a 4-2 win over the Southwest Miami Eagles to earn their first district championship in five years. Trailing by a pair of runs, the Panthers (12-10) erupted for three runs in the top of the fifth inning that were the difference.

Palmetto earns an automatic bid into the regional playoffs, as well as a home game for the opening round. Under the new playoff format, the team had very little hope of making the state playoffs without winning the district title. The Eagles (21-6) are still likely to earn a playoff berth as well, although Southwest will start the playoffs on the road, should they make it.

With two outs in the fifth, the Panthers took the lead. Jaden Clarin was hit by a pitch and Will Silberberg followed with a walk, and junior Blake Brookins jumped on a 1-1 pitch and drove a two-RBI double to left field that gave the Panthers the lead. Brookins then added a valuable insurance run thanks to an RBI single from Luca Arenado.

Reliever Andrew Arias took care of the rest to preserve the victory. The senior held the rope agfter coming on in the third inning, tossing five scoreless frames that gave his club every chance for the eventual comeback. rias scattered three hits and had five strikeouts without issuing any walks.

Southwest jumped ahead early when Tyler Duarte singled to center to score Keith Rey and Christopher Alvarez in the bottom of the first. But Palmetto cut the deficit in half in the fourth when Arenado led off with a triple and scored on an error.