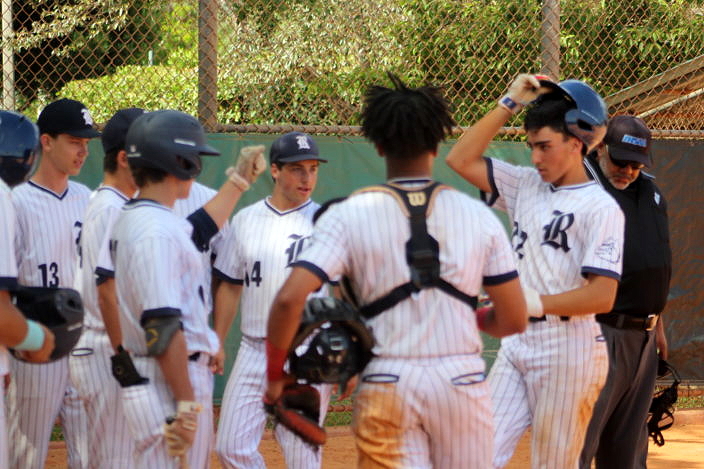 Riviera Prep’s Noel Leon is greeted at home plate by his teammates following his third inning 3-run homer that staked his team to a 5-0 lead.

The Riviera Prep. Bulldogs stepped onto the field at Evelyn Greer Park on Monday afternoon with a chance to make a little history. And did just that.

Thanks to strong performances from starting pitcher Noel Leon and shortstop/closer Eric Fernandez, Riviera Prep. won the program’s first ever postseason game as the Bulldogs cruised to an 8-3 victory over True North Prep. in a 2A-16 district quarterfinal contest.

The win moved Riviera’s season record to 19-6 but the No. 4 seeded Bulldogs will face a daunting task on Wednesday when they take on top-seeded Miami Christian, the No. 4 ranked Miami-Dade team in HSBN’s latest power rankings.

But the Bulldogs will worry about that then. As the sun set on Evelyn Greer Park on Monday, it was all about basking in the feel-good glory of that first postseason win.

“This year our goal from the beginning was to win a district playoff game which we did today so it’s another step in the right direction,” said Riviera manager Emilio Fernandez. “This was a good competitive ball game against a good club today and every step forward is really what matters for us. Hopefully in the near future, we’ll be ready to make that deep playoff run.”

Fernandez can hope that the near future is this week but that will likely mean having to upset Miami Christian and win the district tournament. Despite the team’s nice won/loss record, the Bulldogs didn’t play a difficult enough regular season schedule and won’t qualify for the regional playoffs as a wild card entry.

“Despite our record, I guess we ended up behind teams that are six or seven games below .500 which odd so we know that we need to win our district,” said Fernandez. “But everything from here on out is a step in the right direction for us. When you are young and growing, it’s a step-by-step process.” 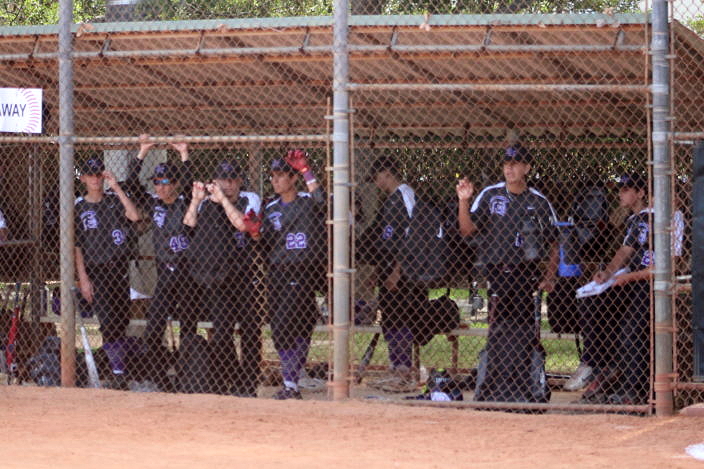 Fernandez watched his son Eric, a University of Miami commit, get the Bulldogs off on the right foot when he blasted a solo home run to right off True North starter Alan Soler. After Leon walked in the second and stole second, he came home on a Justin Travieso single to make it 2-0.

But Leon’s big curtain call moment came in the last of the third. With runners on first and third and two outs, he got hold of a Soler 3-2 fast ball out over the plate and blasted it over the fence in right center for a three-run bomb and 5-0 Riviera lead.

“My first at-bat, I had a four-pitch walk so I was expecting to get something in the strike zone when I got back up again and was looking for middle away,” said Leon. I got the pitch I was looking for, got a hard swing and out it went. Today feels great, we are a small school. We only have 360 kids in the school, means a lot to us. We don’t have a lot of kids on the team because even when I was done pitching, I had to go to third base.”

After Marc Quarrie singled in a run in the bottom of the fourth, Eric Fernandez stepped up and brought two more runs in with a double down the left field line to balloon the lead to 8-0. That was more than enough room for Leon who pitched into the sixth inning before running into trouble as the Titans put together a three-run rally thanks to an RBI single from Lucas Christful and a two-RBI double by Matias Fischer.

But Max Tercero came in and managed to put out the Titan rally before Fernandez came in to record the final three outs in the seventh, throwing just 12 pitches.

“Today was big because this is our first postseason win in school history and it means a lot to us going forward,” said Eric Fernandez, just a junior who has already committed to the University of Miami. “It’s always nice to make a little history. We’re a tough ball club and going to ride this thing out until the wheels come off.”

Leon finished his day on the mound with five strikeouts and four hits before giving way to Tercero.

“It seems like whenever you guys (HSBN) are here Noel pitches really well so we need to get you guys out here more often,” said Emilio Fernandez laughing. “He was really strong out there today and his velocity was good. And of course he had that great at-bat as well. He’s been swinging the bat really well and I would say since mid-season he’s been one of our better offensive players and that three-run bomb gave us the big lead and really put us in the driver’s seat.” 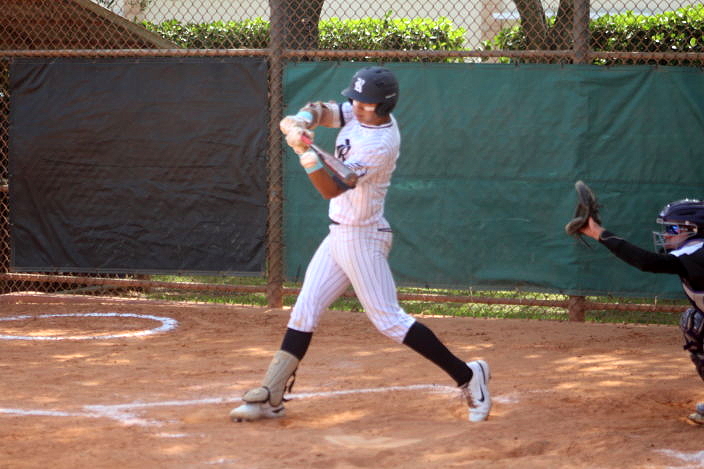 Riviera Prep’s Eric Fernandez had a solo home run to get things started for the Bulldogs in the first inning.

For Tru North, it was the end of the program’s initial season and a highly successful one at that as manager Adrian Nieto led his Titans to a 12-win season, finishing with a final 12-13 mark. Particularly impressive is that Nieto pulled it off with a roster that had no seniors, only one junior and one sophomore. Everybody else was either in seventh, eighth or ninth grade.

“This is all about growing something,” said Nieto who played for Plantation American Heritage’s national championship team in 2008 before moving on to a major league career. “The main objective when we put this group together was as much as we want to win this year, it’s about growth and development. We actually did our share of winning as well because not only did we win 12 games but had a few more where we lost late leads or could’ve actually had even more wins. But that’s the deal when you have a team this young and I’m really proud of the season we had. Watch out for us in a few years – True North baseball is coming.”