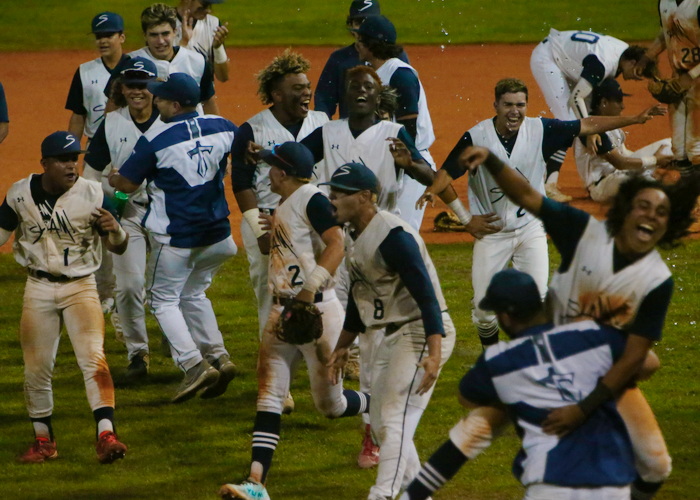 SLAM Academy celebrates a district championship on Thursday after a 6-5 win over Florida Christian. Photo by Glenn Sattell

If nothing else, SLAM Academy is a supremely confident team. It’s a confidence that never wavered, not even in the face of a 4-1 deficit to Florida Christian Academy, ranked No. 8 in the Miami-Dade Power Rankings. Not even as the game progressed on the Patriots’ home field Thursday night for the District 3A-15 championship.

The Titans stood tall and rallied to tie the game in the sixth inning before adding a seventh-inning rally that was enough to hold off the Patriots, 6-5.

“We battled the whole night,” said SLAM Academy manager Eric Florin. “Like I’ve said before, if we keep our approach throughout the whole game, at some point it’s going to give in. That’s what we did tonight. We didn’t falter from it. We continued with our approaches all night, and we ended up breaking through.”

And now the Titans (16-5) will make room in the school’s trophy case for some hardware.

“It’s been a long time coming for us,” Florin said of the district crown. “We’ve come close the last four years and it feels really good.”

Osnel Rojas came through with a clutch RBI single in the sixth, scoring Enrique Alvarez before Niomar Martinez scored on an error to tie the game at 4-4. The Titans added two more in the seventh when Angel Santiago and Nick Rodriguez opened the inning with back-to-back singles and scored on consecutive bases-loaded walks to Alvarez and Jose Alfonso.

It was just enough to hold back the Patriots (17-9), who scored a run in the bottom of the seventh on an RBI-single by Matthew Say, which scored Andres Balart, who was running for Ryan Campo, who walked. 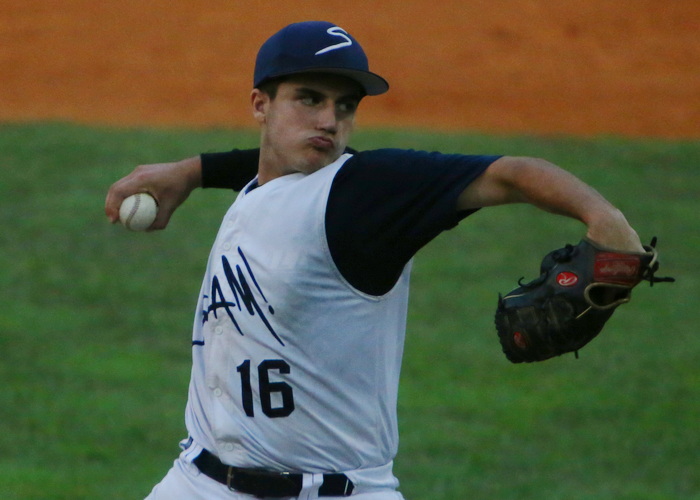 SLAM Academy starting pitcher Erhiam Gastell fires to the plate in the early innings on Thursday in the district championship game at Florida Christian. Photo by Glenn Sattell

Erhiam Gastell worked the first four-plus innings of the pressure packed game and understandably had more than a few butterflies.

“It’s the first game I’ve started that’s this big,” Gastell said. “I felt a little nervous the first couple of innings and we didn’t play to the best of our ability. We came back locked in and did our best.

After falling behind 4-1 in the third inning, Titans pitching kept the Patriots off the scoreboard until the seventh.

“I threw a lot of strikes, didn’t let the mistakes that we made affect me,” said Gastell with the knowledge that SLAM Academy is district champions. “It feels really good.” 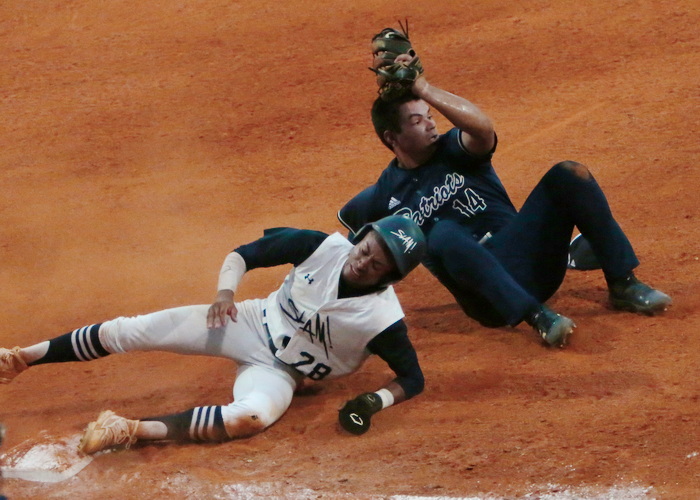 It was a close play at third base and a close one-run finish on Thursday with SLAM taking the district title in a game played at Florida Christian. Photo by Glenn Sattell

Jeffred Fermin followed Gastell to the mound in a high-leverage situation, needing to hold off a Patriots team that threatened to run away with the game early. He said he felt no pressure coming into such a key situation in the game.

“I trusted my teammates, I trusted my coaches, my pitches, and the only thing I wanted to do was throw strikes and get my teammates back in that dugout,” said Fermin, who worked 1 2/3 innings, striking out two and allowing just one hit. “I knew we were going to get the job done.”

They did, and accepted the district championship trophy afterwards.

Florida Christian spotted the Titans a 1-0 lead in the second inning before answering with a pair of runs of its own to take a 2-1 lead, then added two more in the third inning. Keanu Rodriguez and Jacob Brigman both crossed the plate to make it a 4-1 game. 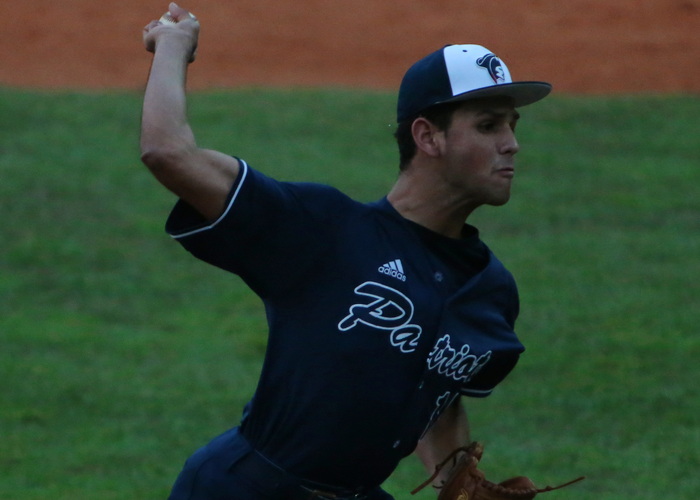 But that’s when SLAM Academy pitching locked down the Patriots’ bats until the lone run in the seventh left the Patriots one shy.

“We wiggled out a jam there in the fifth,” said Florida Christian manager Chris Brigman. “I thought that was going to be enough. At the end of the day, we just didn’t do enough. So, we’ll regroup and see where we land.”

The Patriots will no doubt join SLAM Academy as qualifiers for the regional tournament next week.

“That’s the silver lining at least we’re going to have to try to live with that tonight,” Brigman said.