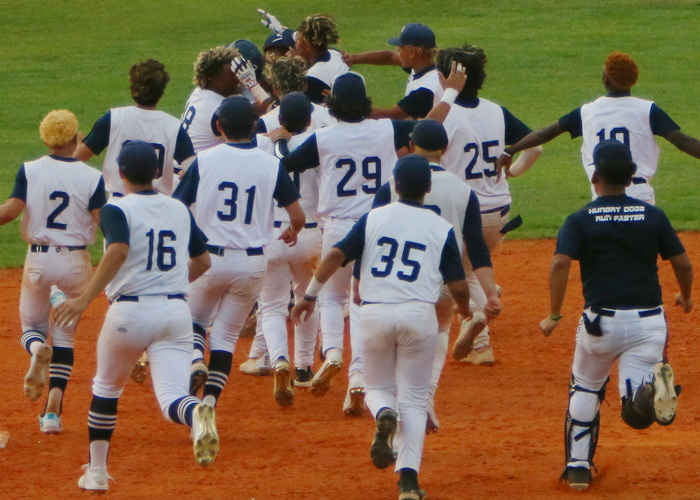 SLAM Academy mobs teammate Nick Rodriguez at second base after he delivered a walk-off single in the Titans’ 3-2 win over Gulliver Prep on Tuesday in a District 3A-15 semifinals playoff game at Florida Christian. Photo by Glenn Sattell

Nick Rodriguez delivered a walk-off RBI single in the bottom of the ninth inning to lift SLAM Academy to a 3-2 win over Gulliver Prep in a District 3A-15 semifinals playoff game on Tuesday afternoon at Florida Christian High School.

The win advances the Titans to the district championship game at 7:15 p.m. Thursday against hosts Florida Christian.

Rodriguez lined a single to right field and Osnel Rojas scored the winning run as the Titans (15-5) rallied late to overcome a 2-0 deficit against a Gulliver Prep team (16-10) that came into the game rated No. 12 in the Miami-Dade Power Rankings.

“We’d struggled in big games all year and I think they saved it for this moment here,” said SLAM Academy manager Eric Florin, whose team scored twice in the sixth to tie it at 2 and send the game to extra innings. “They battled. There’s nothing other than that I can say – they battled. They stayed in it. They had great ABs the whole game. They stuck with the gameplan and that’s what we’ve done all year. That’s exactly what we want to do. We want to stick with our gameplan and our approach, and then we end up being successful with it.”

“I knew coming into the game as leadoff (hitter) I needed to have good, quality at-bats – see a lot of pitches, get the starter out of the game,” Rodriguez said. “We did just that.”

He got a rare second chance to produce the game-winner. He came up with a walk-off opportunity in a 2-2 seventh inning, stepping into the batter’s box with runners at second and third and only one out, but didn’t come through. He wasn’t about to let a second opportunity slip away.

“I knew that I was given another opportunity, and it was showtime,” said Rodriguez, whose approach was simple. “I’m not striking out and I’m having a great, quality at-bat.” 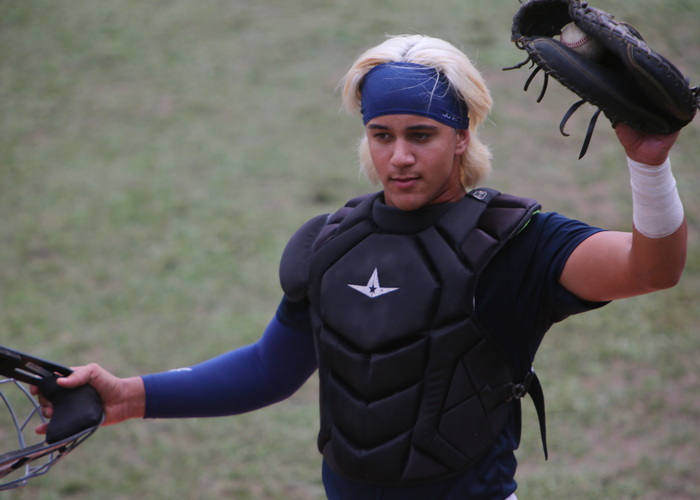 SLAM Academy catcher Nick Rodriguez had the game-winning hit in the Titans’ 3-2 9-inning win over Gulliver Prep on Tuesday. Photo by Glenn Sattell

He did, lacing a shot past first base and down the right-field line.

“Just pure joy,” Rodriguez said of his initial reaction. “I didn’t know we won the game until I passed first base, because I was just head down, hard 90. It’s amazing. I love it.”

Rodriguez contributed to the Titan’s two-run sixth inning that tied the game, 2-2. He singled and scored ahead of Fabio Peralta on a clutch two-run single from Enrique Alvarez, one of his two hits in the game.

Alvarez explained how a subtle change in approach enabled him to come through in a crucial situation. 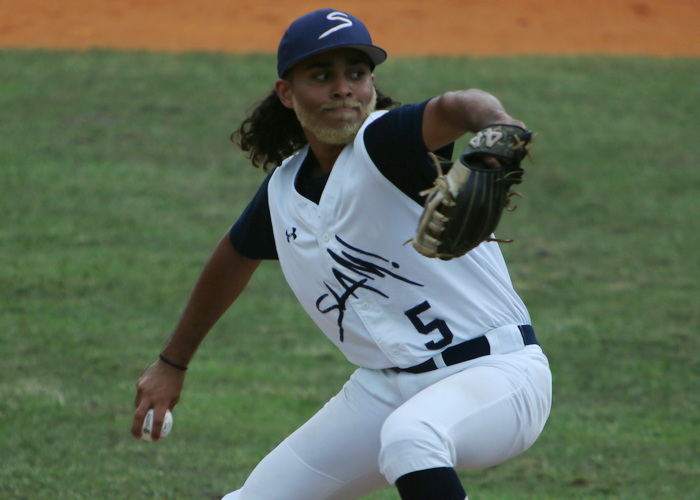 With the playoff game on the line, the Titans’ season on the line, Alavarez said that nevertheless he felt relaxed and composed.

“I knew something was going to happen with that at-bat,” he said. “I just said to myself, ‘wow, I really love baseball.’”

Jose Alfonso, Niomar Martinez and Angel Santiago also contributed to the Titans’ eight-hit attack, all but one coming in the sixth inning or later.

Chris Blanco got the win in relief for SLAM Academy. Rojas went the first 4 1/3 innings, allowing just one hit while striking out four. Jeffred Fermin and Hector Escobar followed, keeping the game within reach. The Titans’ staff limited the Raiders to just three hits for the game.

However, Gulliver Prep looked to have things in control with single markers in the fifth and sixth innings for a 2-0 lead. Aiden Aparicio delivered an RBI single in the fifth, scoring Chris King, and Milo Suarez was hit by a pitch to open the sixth inning, went to second on a single by Ethan Puig, stole third and scored on an error. 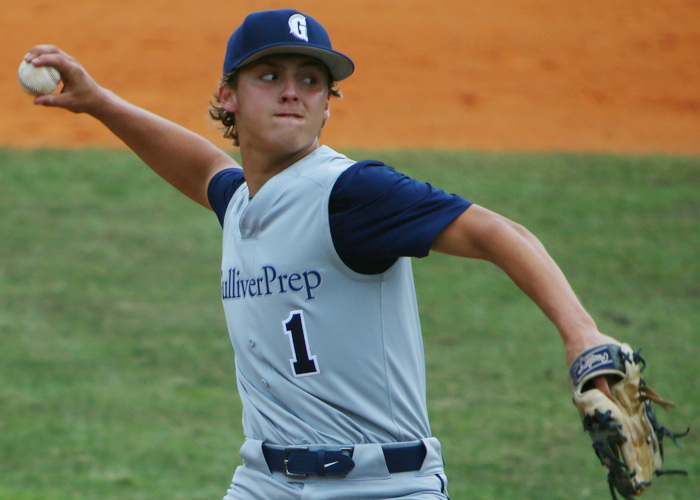 It appeared to be enough firepower for Raiders starter Brixton Lofgren, who cruised into the sixth inning with a one-hitter.

“My starting pitcher is always awesome,” said Gulliver Prep manager Chris Leon. “Brixton Lofgren is one of the best pitchers in Miami-Dade and he deserves the credit.”

Leon completed his first season at the Raiders’ helm and hopes to build on that initial campaign.

“As far as me and my assistants go about it, we’re teaching them the right way to do things,” Leon said. “A lot of our players have aspirations of playing college baseball and I hope they enjoyed the realness, the way I am, and the expectations that we set as a team, and that they’ll just continue to work hard so that they can be in these positions in the future.”