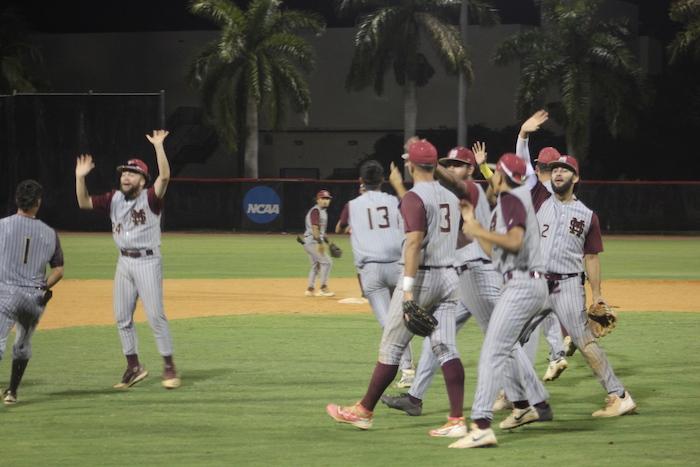 Miami Springs players celebrate their 5-3 win over Mater Lakes after the final out is recorded.

Just six days after having to watch Mater Lakes players dance on their field following a big District 4A-15 championship game victory, the Miami Springs Golden Hawks exacted a little measure of revenge on Wednesday night.

Springs, the No. 1 ranked Miami-Dade team in the final regular season HSBN power rankings, was a little bruised and battered from the 10-6 extra inning loss (costing them the No. 1 seed), but won the game that really counted, knocking off Mater Lakes 5-3 in a Region 4-4A quarterfinal contest before a huge crowd at Barry University. Mater Lakes also ended Springs’ season a year ago by beating the Hawks 7-5 on their home field in a regional semifinal game.

The big-time hero on this night for Springs was pitcher Jordan Vargas. Just six days after turning in a brilliant performance against the potent Bears offensive attack (giving up just one run over seven innings), Vargas was at it again on Wednesday night. Even though things got choppy at times as he hit four batters and walked three others, Vargas gave up just two hits and worked his way out of a huge fifth inning jam to gut it out into the seventh inning.

After he recorded a strikeout to start the seventh, he reached his max pitch count, giving up the mound to University of Miami commit Brandon Olivera who came in and cooly recorded the final two outs to end the contest.

Now stuck as a wild card No. 5 seed, the road will only get tougher for Springs as the Hawks will now travel south to Key West on Saturday night to take on the No. 1 seeded Conchs, HSBN’s No. 5 team, in a regional semifinal.

“Having just faced them last week, I definitely knew I would have to change my approach tonight,” said Vargas. “I gave them more fastballs because last week I was throwing a lot of changeups. That fifth inning? I just had to keep my head, stay focused, block out all the noise and find a way to get out of it. This means a lot, we really wanted this tonight and get some revenge from last week. Now it’s off to Key West – it’s going to be a fight.” 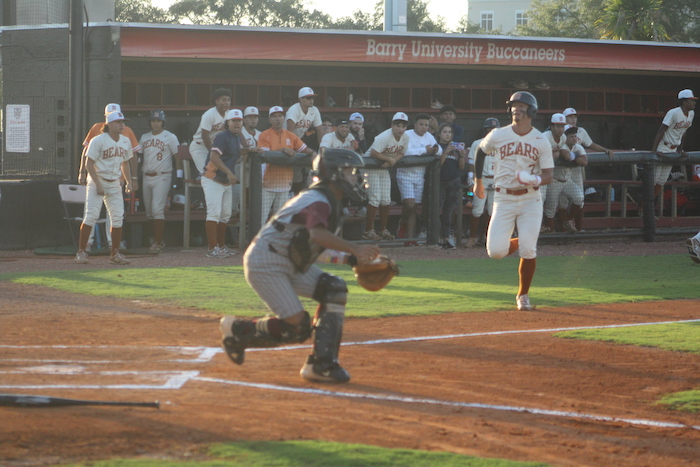 Mater Lakes’ Rey Plasencia races home in the first inning with his team’s first run of the night.

With a nice cushy 5-1 lead, Vargas had things in cruise control. And with a runner on first and two outs, it looked like he would take that four run lead to the sixth.

But then came problems when Brandyn Gonzalez singled to right putting runners on the corners. When Gonzalez stole second, first base was open so the Hawks intentionally walked Puertas, the team’s best hitter, loading the bases.

That strategy backfired when Vargas hit Damian Hernandez with the next pitch forcing in a run and followed that up with a four pitch walk to Dayron Ricabal to force in another run. With the Mater Lakes dugout and the noisy Bears crowd worked up into a frenzy, Vargas, with Olivera warming up in the bullpen and ready to come in, kept his cool and struck out Andres Gomez to end the inning. Facing the bottom of the lineup in the sixth, he retired the side in order getting him into the seventh.

“Jordan’s a dog, just unbelievable,” said Springs manager David Fanshawe. “I’ve been confident in him all season long. He’s been the same kid all year. He comes out, does his thing and doesn’t let anybody rattle him. We weren’t taking him out until he reached his max pitch count. If there’s anybody that can face adversity, it’s Jordan and you saw that out there tonight when he worked his way out of that fifth inning.”

With Jesus Peña, who led off the third inning with a single, on second with two outs, up came one of the best sluggers in South Florida, Jason Torres and one of the key plays of the night.

Torres hit a hard ground ball to second base but the ball squirted underneath the second baseman’s glove and just far enough away from him that Peña came around and scored from third tying the game at one. After a Jordan Perez base hit, Abdriel Delgado stepped up and hit a shot to center field that the Mater Lakes center fielder hustled back to get. But he stumbled as he was about to make the catch and the ball came out of his glove, scoring both Torres and Perez to make it 3-1.

The Hawks (20-5) then added what proved to be the two game-deciding runs in the fifth when Ruben Gandarilla opened the inning by getting down to second after an infield throwing error by the third baseman went wide of first. One out later, Mater Lakes starter Andrew Tano, who had been solid up to that point, lost the strike zone and walked three consecutive batters to bring in a run. Anthony Ruiz then brought in another run on a fielder’s choice groundout.

“To be honest, yeah, maybe this was about getting a little revenge tonight,” said Torres. “Not only did they beat us in districts last week on our own field, but they came to our field last year and beat us in regionals ending our season. This was definitely a little pay back that we felt we owed them. We were not about to lose to them three times in two years.” 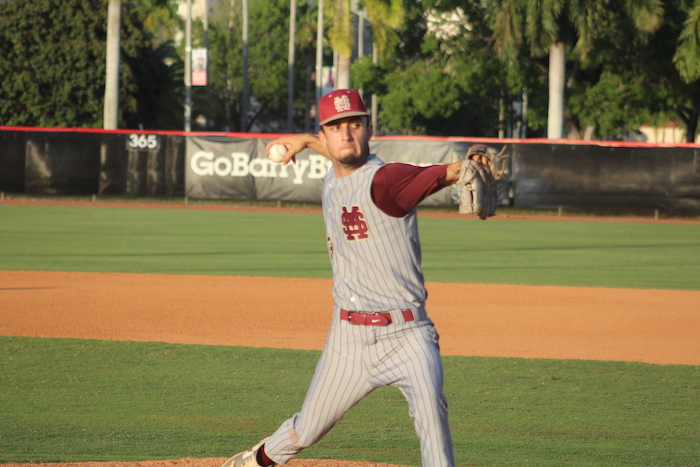 Miami Springs pitcher Jordan Vargas turned in a strong performance giving up just two hits in six and 1/3 innings to record the win.

For Mater Lakes, it was a disappointing end to a promising season.

“Give credit to their pitcher, we’re not an easy offensive lineup to shut down and not only did he do it to us last week but he went out there and did it to us again tonight,” said Mater Lakes manager Albert Osorio speaking of Vargas. “All of that said, we played bad defensively as all five runs we gave up were unearned and sometimes that’s what it comes down to in a game like this. I feel like we gave them the game to be honest but I’m still proud of our kids for continuing to battle and overcoming the adversity we had to overcome.”