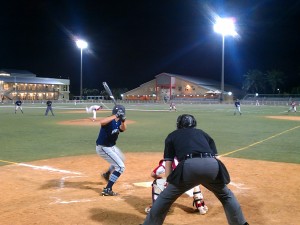 Luis Mercado had two hits for Somerset Academy in its 6-1 win over Miami Country Day.

All it took was one big inning to do in Miami Country Day on Wednesday as Somerset Academy scored five in the sixth en route to a 6-1 win.

“We just couldn’t score any runs today,” Barrios said. “I have a lot of guys battling the injury bug, but I like that my young guys here kept fighting.”

Casey Garcia dealt a complete-game, Brandon Melendez ran home on a passed ball for the go-ahead run and Luis Mercado went 2-for-5 with an RBI as Somerset put up a five-run sixth in what seemed like a pitchers’ duel.

“Casey pitched a heck of a game,” Somerset coach Onel Garcia said. “He kept us in the game and then took us to the end when it mattered most.”

Garcia, a sophomore, walked just one batter and struck out five using a myriad of breaking balls while painting the strike zone black.

“I was pitching to contact, getting outs, trying to keep the ball down,” Garcia said. “My curve ball was working today. They had a tough time getting to it.”

Neither team got too much through five innings in a 1-1 game until Somerset’s Melendez took advantage of sloppy play behind the plate to change the tide of the game.

“(Melendez) is a real aggressive runner,” Garcia said. “And he did a good job staying inside the third-base line.”

“I saw that they had like three passed balls, so I kept creeping close,” Melendez said. “On the one that I scored, I got caught in the middle because of the small backstop behind the plate, so I tried to get him to throw to third. When he did, I ran along the same line as where the catcher’s glove was so that I’d be in the way.”

The ball dribbled off his back as Melendez ran passed the plate to put Somerset ahead for good.

Mercado chipped in with an RBI single, Brandon Acevedo knocked in a run and John Ham added a two-run double with two outs to cap a five-run top of the sixth for Somerset.

The Spartans, on the other hand, managed just two base-runners the rest of the game as Garcia closed the door.