Decision Day 2012 was last Tuesday for the nation, but for several of the county’s top players, their decision day came Wednesday when they made big choices in their young lives by signing a National Letter of Intent with Division I colleges.

“The University of Miami is a prestigious university, and so many great players have gone through there,” Abreu said. “It’s an honor to be able to say I’m going to be a Miami Hurricane. I would love to get to Omaha and win a national championship and put UM back on the map and show the country how South Florida has the best baseball in the country.”

Abreu, who hit around .390 last year, said it’s great having other good players from around the area also going to Miami.

“We’ve all played together since we were young,” he said. “It’s great to have that bond. It’s almost like extending the family a little bigger, and it’s going to be an awesome experience.” 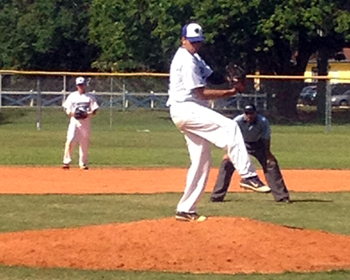 “Willie Abreu is one of the top outfielders in the country,” Mater Academy manager Eddie Gorriz said. “He started in right field for Team USA and looks to be our starting center fielder this season. He has the speed and range to cover ground even though many feel he will be a corner guy at the next level. He has the right attitude to lead a team.”

Danny Garcia said he chose Miami so he could be close to home and help his parents.

“It was one of my dream schools, and I succeeded in that,” said Garcia, who had committed to Virginia Tech.

Westwood manager Luis Padron said Garcia “has a great makeup. He throws an 88-91 mph fastball and is a great competitor. It’s been an absolute pleasure to coach him for two years. He should play beyond college.”

Garcia credits Padron for a lot of his success.

“I really give thanks to Coach Padron,” Garcia said. “He’s told me that hard work and dedication equals success. Without him, I wouldn’t be where I am today.”

Bryan Garcia and Rivera helped Columbus reach the state tournament last year. Garcia, who tops out at 93 mph, went 4-0 with 27 strikeouts and a 2.91 ERA in 21 innings last season.

“[Garcia] mainly worked out of the bullpen, but he has risen high on the draft list to the top three rounds,” Columbus manager Joe Weber said. “He’s played for all the scout teams.”

Rivera is a four-year varsity starter who hit .288 with 28 runs and 21 RBI. He belted 12 doubles and three home runs.

“It’s fun to follow their careers and watch how they go on to college,” Weber said. “As a coach, that’s our job to get to them on to the next level.”

The Explorers produced nine Division I players last year and 150 over the past 20 years, Weber said.

“It’s a tradition that keeps going,” he said.

Player, position: Jose “Chiqui” Carrera, second base
School: St. Brendan
Signed with: Manhattan College
Coach comment (Joe Cubas): Since coming to St. Brendan, Chiqui has been the heart and sole of this program. He is an incredible student who carries a 4.08 GPA while taking honor courses with his sights set on becoming an engineer. Last year, Chiqui made First Team All-Dade, led the St. Brendan Sabres to a 22-7 record, first-ever district championship and best record in the history of the school. He bats leadoff and is the “table-setter” for everyone else in the line-up. After reviewing numerous scholarships offers from different school interested in him, Chiqui chose Manhattan College, a D-I school in the MAAC Conference for two reasons: great school ranked in the top 10 in the nation in engineering and a great baseball program lead by coach Jim Duffy. He is ecstatic to have this opportunity and is looking forward to the 2013 season and his future in the Big Apple. With only a 5-foot-2 frame, I have always said that “pound for pound, Chiqui is the best baseball player I have ever seen and a giant of a kid.”

Player, position: Miguel Ceballos, short stop
School: St. Brendan
Signed with: Virginia Tech
Coach comment (Joe Cubas): Since coming to St. Brendan for his sophomore year, Miguel has been the steady performer, hitting third or cleanup in the lineup and is one of the most talented players to ever play at St. Brendan. He is considered by MLB scouts as one of the top prospects in the South Florida area for the upcoming 2013 draft. He is also an honor student with a 4.10 GPA. After evaluating numerous schools and their scholarship offers, Miguel chose Virginia Tech because of the academic opportunities they provide him as he is still an undecided major, a great baseball program under the leadership of coach Pete Hughes and the opportunity to play in one of the best baseball conferences in the country, the ACC. Miguel has been the quiet leader of our team and the most talented.

Player, position: Laurent Polenghi, outfield
School: St. Brendan
Signed with: New York Tech
Coach comment (Joe Cubas): Laurent is a business major who transferred to St. Brendan during the summer. He quickly made the adjustment to our school and our baseball program where he immediately excelled in the classroom and on the field and has made a tremendous impact on our program. He is an incredibly hard-working individual who stands at 6-foot-1 with tremendous abilities. He is an excellent student who carries a 3.8 GPA. During the fall season, once given the opportunity to play, Laurent showcased his tools in front of numerous colleges and universities. As a result, several schools expressed their interest and extended him scholarship offers. He chose to accept a scholarship from New York Tech for several reason: a great business school, a major D-I program and the close-knit and caring environment established by coach Chris Rojas.

Player, position: Kevin Abraham, catcher
School: Mater Academy
Signed with: Florida Atlantic
Coach comment (Eddie Gorriz): Kevin Abraham really came alive for us after the Key West game last year and has been hot ever since. He has great ability behind the plate and his plus arm shuts down the opponent’s running game.

Player, position: JC Escarra, third base
School: Mater Academy
Signed with: Florida International
Coach comment (Eddie Gorriz): JC Escarra is defensively one of the best high school third baseman that I have seen. He’ll throw 90-plus across the diamond and has very fast reflexes to go along with great hands. He is a solid lefty bat with a ton of ability.

Player, position: Anthony Penas, third base
School: Westwood Christian
Signed with: Campbell
Coach comment (Luis Padron): He has a great make-up, hits with power to all fields, great leader, captain of our team. He should also play beyond college.

Player, position: Michael Paez, short stop
School: Sunset
Signed with: Coastal Carolina
Coach comment (Armando Palaez): Michael Paez is a four-year letterman here at Sunset High School and has been a steady fixture at short stop for us. He is a five-tool guy that has been getting better and stronger every year. As a sophomore, he was our MVP of the Sarasota tournament, which he ended up closing the championship game and he hasn’t stopped producing since. He’s a great teammate, student, son. He has great work habits, very dedicated to excel and loves big games, something you cant teach. The love and passion to compete in pressure situations is what fuels him to rise to the occasion. He will truly be missed next year. We expect another big year from him this year with the expectations of winning the district and moving on to regional play.