Youth A Major Element Among Each Team In 3A-15 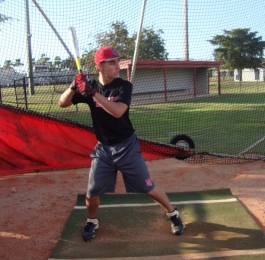 The latest realignment has brought an interesting pairing to District 3A-15, with Broward County’s Sagemont joining a crop of Miami-Dade regulars this year.

“We are in a tough district distance-wise alone,” joked Sagemont manager Wesley Morejon. “There are some great teams there, but they also don’t know us. It works both ways. We build camaraderie on the bus when we travel, and get that experience to play in different parks against teams we are not accustomed to. Hopefully it helps us get ready for the playoffs.”

One commonality among these small-school programs is that they lack large numbers and therefore the depth that provides. Players must stay healthy for any of these clubs to contend this year. In a case such as with Archbishop Curley, all but one of the players also plays another sport at the school, and this athleticism helps to offset the lack of available depth.

Each of these clubs relies on youth and speed on offense, and a solid reliable defense. Westwood Christian is the only member of the group who is coming off a winning season last year, after the Warriors won the Class 2A state title. However, nearly all of those players are now gone.

Therefore, it is a very even playing field against this landscape. Every club in this mix feels optimism that they can compete for the district title, and it should make for an exciting season to watch how it all plays out on the field.

Archbishop Curley-Notre Dame Manager Jerry Yeash has watched the South Florida baseball landscape change over the past three decades. As the Knights skipper enters his 32nd season at the helm he is still going strong by molding his kids into good baseball players and even better young men.

The Knights used to played teams like Monsignor Pace, Key West, St. Thomas Aquinas, Cardinal Gibbons and Miami Edison annually. However, some old rivalries have faded as schools try to boost their profile through athletics. But the private Catholic school of about 300 students has kept a low profile through the years, and Yeash prefers it that way…[Read More]

The Dade Christian Crusaders opened a lot of eyes around Miami baseball circles in 2013. After finishing a lowly 6-19 the season before and bringing in a new manager last offseason, the program appeared to be headed in a downward spiral.

With a new manager coming in to implement his brand of baseball, the first season is usually a rough one as players adapt to the demands of a new staff. However, as the 2013 season progressed, great things happened under new skipper Reggie Rodriguez. Not only did the Crusaders win…[Read More]

The Miami Country Day Spartans and Manager Paul Barrios went through the growing pains of fielding a roster loaded with younger players last year. The team had four seniors but the majority of their production came from the underclassman and even a few middle-schoolers.

This season, many of those players have returned after enduring the ups and downs of a 7-15 season. The always optimistic Barrios will try to lead his team back to the district playoffs and their first South Florida Baseball Conference Championship since 2012…[Read More]

Young teams do not normally look and act like the Sagemont Lions do.

This roster brings tons of poise and baseball awareness to the field, despite the fact that they are mostly underclassmen. The players come from a community that is deeply ingrained in the game of baseball, the players know and love the game, and even though they are young the team has just enough of the right pieces in place to contend…[Read More]
Westwood Christian