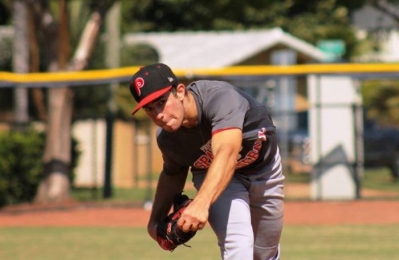 Nick Fusco and the rest of the Monsignor Pace Spartans are ready to battle in this tough district.

Realignment did not change much in this district, where these four teams remain together in a battle that has been tight and competitive the past two years when they all came together. With one less team a simple district playoff bracket lets each of these four worthy contenders conscious of the fact that one win gets them into the district championship and also the regional playoffs.

“We are going to be the target because we won the district last year, but we are getting ready to be up for that challenge,” St. Brendan manager Tito Rodriguez admitted.

“Being the one seed in a very competitive district was a big deal for them last year,” monsignor Pace manager Tom Duffin said. “It’s still going to be a tough one with LaSalle getting better and St. Brendan and Mater Lakes again being strong. Mater Lakes is the one that knocked us out, so it is going to be a dogfight. We have to go out there and focus.”

A year after fielding a team with many young and inexperienced players, Lions manager Hernan Adames is pleased with the growth and development of his club. His starting nine are all legitimate varsity ball players, and the pitching is deep. The team has a solid group of starters, enough depth to have a few set-up men and a legitimate closer. The team is coming together well and everyone believes they can succeed this season.

“I feel like this year we have all bought into the system and we all want to buy into the system,” said senior catcher George Fernandez. “We came up as a team this year and coach has showed us what it is to be a team and a family. As we all come together we actually have been showing a lot of improvement as a team. I can guarantee that we are going to go out there every game as a team and we’re going to give a challenge to everybody we face. We are going to treat everybody the same and play as hard as we can.”

This is a team that is backing up the talk and putting in the effort. Adames says they are not happy with only a mile run and are practicing at an excellent level. They embrace extra work and the veterans are leading by great examples.

“We are very excited about what we were able to accomplish in the summer and fall and now to the early spring,” Adames said. “This ball club now has a tremendous change in who they go about practice and love of the game. We are going to always put team first.”

Last year the Bears played above their years to be a worthy contender that advanced into the regional playoffs. The club has been very close and knocking on the door of making a deep playoff run, and the hope is this is the year they turn that corner. Many of those players are veterans of the system and manager Cesar Temes Jr. understands how that consistent longevity has helped keep the program strong, and hopefully finally has them in position to capitalize.

“We’ve been able to grow as a school but we have kept that small-school mentality,” Temes Jr. said. “The continuity with the coaches has been great and we have most of the same coaches since when we started. Some of these boys have played for us back all the way to the sixth grade and that has been able to maintain what we want and what we build, and that consistency in the program.”

It is a family feeling for the players being together for so long, and for a club that returns 12 seniors this season there would be no better feeling then to go out on top. There is a lot of depth on defense and strength art the corners and behind the plate and a dangerous pitching staff. At the front of the pack the Bears have a legit ace in senior left-hander Rene Arauz, someone who gives them a chance to contend in every district contest.

“I prepare myself each and every day to have people say that about me, and I work hard and treat everybody with respect,” Arauz said. “Each day I just grind, grind grind to that game day and then I am ready to go. I am ready to pitch. Sometimes you give up a hit or a home run, and sometimes you get a strikeout. But I know my teammates are there backing me up, especially in those big games where there are a whole bunch of fans. Then it is just me and the catcher.”

Two seasons back most of the Monsignor Pace players were just getting started in the program and learning what the expectations are like. The team was coming off its second straight state appearance, but had also graduated nearly every member of the teams that had been a part of it. In their place were a group of youngsters who were getting their first chance to wear the Spartans uniform and play for legendary manager Tom Duffin.

“Two years ago they were all shell shocked and didn’t know what this crazy man had in store for them,” Duffin recalled with a grin. “Now they are like an old beat up dog that you can only beat so much. Now they know the ropes and they can just let their talents go and play relaxed. As long as they focus between the lines I like them relaxed.”
[KEEP READING]

New St. Brendan Manager Tito Rodriguez has a simple challenge for his guys that will lead to their success this season, and that is to play tough for all seven innings and all 21 outs. The team is coming off a season in which the Sabres made it to the regional semifinals, and the coaches are using the pain of having their playoff run cut short as an example to work harder and play harder this season.

“The kids are excited and they like the way that I work,” Rodriguez said. “They like the way the coaches work with them, but it is a little bit different this year. We are trying to get more to a professional level where we are working more in practices, doing more hitting in the cages and working out more in the gym. But the first approach for them is to make sure they get better grades and they are better human beings. They have to take care of their families, their brothers and their friends.
[KEEP READING]