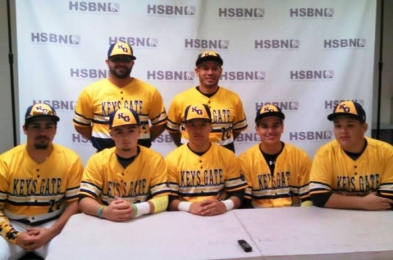 Members of Keys Gate Charter, during their press conference as part of HSBN’s 2016 Media Day.

There is almost no gap between the top and bottom teams in this small district. State realignment saw a few teams move elsewhere this season, leaving this district in a unique scenario. The team that earns the top seed in this district will automatically advance to the district championship, which also brings with it an automatic berth into the regional playoffs. The remaining two teams will have their season on the line as they face off for the other championship slot.

Last year these three clubs proved they were equally matched in the close and competitive games they played against one another. They all know they can beat the other two, and they also know they can lose to them too. Last season Key West went in as the top seed, so Conchs manager Ralph Henriquez knows how tough it is to earn that distinction.

“We have a lot of sophomores and a lot of young kids and we’re working real hard to be competitive with our district,” Henriquez said. “Gulliver is always going to put up a good club and Keys Gate just keeps getting better, and they have a couple of pretty good pitchers over there. So it is going to be tough for us this year. But we’ll compete, one way or another.”

Even as big as the top seed is, all three clubs concede that it all comes down to the same thing in the end. When the districts playoffs arrive it will be or die. So they are treating each of their four district games with that same mentality. Since there are less teams, the clubs agreed to play two district contests this year instead of just one.

“We’re really just gearing up for one game,” said Keys Gate Charter manager Rich Benavides. “The way we scheduled it this year we’ve got enough space and time in between those district games that we will be geared up when we meet up with those guys each time. We know with what we did last year and this year we have lofty expectations.”

It is back to business for the Gulliver Prep Raiders. Under the guide of new manager Manny Crespo Jr. the club is looking to build off a strong 2015 showing in which it won their district for the first time in five years and then advanced all the way to the state Final Four.

“We didn’t get to accomplish what we wanted to last year,” Crespo Jr. said. “I think these guys got a taste for it and they are hungrier this year. They see what it takes and they are ready to put in the effort that perhaps was missing last year. We have a senior-filled team with better leadership qualities, and they are a little bit older. I am looking forward to it.”

Crespo Jr. enjoys the game, but he expects his players to have a more serious and business-like approach this year. Practices are tougher in order to put more pressure on them so that the game becomes a little bit easier for them.

“If it gets us where we need to be then I think we’re all going to do our part,” said senior veteran Gio Soto. “We want to make sure that this year we do hoist that trophy and we’ll do anything for it this year.”

Key West manager Ralph Henriquez admits that his team is very young this season, and that they do not have a whole lot out there that is going to excite the world. But the Conchs skipper knows his kids are going to play hard for the team and they will be fine.

“We’ll win our share of games and we could be a team that sneaks up on people too,” Henriquez said. “We as a group, kids and coaching staff, we do work very hard. No matter what kids we play they know what the standards are and what the expectations here are, and that is to win, go on to the state tournament and win. Even this year, as young and inexperienced as we are, our standards are the same. We are not lowering them just because we have some younger guys this year.”
KEEP READING

The Knights are pushing a veteran group to try and make program history by making a playoff run to the state tournament. Along the way they want to earn a district championship too. While these are the same similar goals as most programs have, this club feels it has the right pieces to make that a reality.

Keys Gate Charter has been growing and improving these past few seasons, and this year could be the culmination of that process. The team has a proven ace in senior William Sanchez, as well as a lot of pitching depth behind him. It is a versatile offense with a solid mix of speed and power, and the team is chock-full of athletes who can help their squad in many different ways.

“The depth that we have this year is tough,” Benavides said. “Every day in practice these guys are competing on the field and in the weight room. We’ve never had depth like this. The last couple of years we have had injuries that derailed our season, but this year we know if someone goes down there are one, two or three guys there. So it is very competitive, and obviously this brings out the best in them.”