Miami-Dade Welcomes Its First Class 7A District In 2014 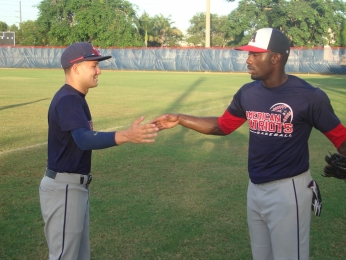 American's Eric Gonzalez and Kevin Williams work on a special handshake before a fall scrimmage in Hialeah.

The elusive road to the state Final Four is a lot different for the teams in this new district. This season represents the first time that any Miami schools have competed in Class 7A. Of the group that have come together to form this district, American is an easy and clear favorite. The Patriots are coming off a run to the state tournament, while Miami Central did not play in a district last season and the other four teams had a combined record of 26-43 collectively in 2013.

“We just have to come out aggressive and play every game like it’s the state semifinals,” said American senior Eric Gonzalez. “If we come out slacking, we can lose. We’re a beatable team, just as any other high school team is.”

Reagan was the number two seed in their district last season, and went 7-3 in a tough district before falling in the district semifinals. The Bison have been on the rise, and they are coming off their first winning season in school history. This year they will be in the hunt to make it at least one step further.

The most enticing aspect of this new district is that the playing field is very level, as Westland Hialeah Manager Jose Alvarez noted.

“The biggest positive is that we are in a district with all public schools,” Alvarez said. “So we don’t have to worry about private schools that usually have much stronger teams. American is a powerhouse, and they can beat anybody, anywhere.”

While the Patriots are easy paper-champions, they still must back this recognition up by continuing the same strong play that earned them this reputation. The rest of the clubs will all be gunning for them, and they will all give the Patriots their best game whenever they face them.

The American Patriots are fresh off an impressive 2013 campaign which saw them finish with a 21-9 record and a trip to the Class 8A state semis.

Although the Patriots fell short, they return a myriad of talent at multiple positions. They were the only public school team out of Miami-Dade county to make it to the state playoffs in Fort Myers last season…[Read More]

There was a time when the baseball program at Hialeah-Miami Lakes High held the standard for success in Miami-Dade County. The Trojans won an unheralded four state championships within a ten year stretch in the 1970′s and 80′s, including a national championship in 1985.

Today, those great teams of years past only serve as memories of what used to be at Lakes. With the construction of numerous high schools over the years in the northwest section of Miami-Dade County as the population has grown, the Trojans’ talent pool has spread thin…[Read More]

2013 Record: 0-4
Manager: Andres Cerrato
Coaching Staff: Kevin Hoesley, Phillip Jerez
Outlook: The Rockets did not compete in a district last season, and are led by a new coaching staff. Typically programs need some time to come together before they are able to compete for a district title, and the Rockets are slowly building their club in that direction.

Coming off their first winning regular season since the school opened in 2006, the Reagan Bison look to build off of that momentum under second year manager J.C. Huguet. The team finished 11-11 overall last year and with a few key pieces returning, Huguet hopes to establish a consistent competitor at the school located in Doral.

“We’re just gonna go step-by-step,” said Huguet.”Let’s have a winning record in district, and then qualify for the district playoffs, and then lets see what happens from there.”…[Read More]

While most high school baseball players spent their summer hitting up the gym or going to the batting cages to take a few swings, for best friends and Westland Hialeah seniors Erik Gonzalez and Frankie Morejon, their summer almost took a turn for the worst one summer day.

The two players and a couple of friends had just arrived at Gonzalez’s house 15 minutes earlier, when gunshots erupted just down the street. Gonzalez gathered the group and they locked themselves in a room to avoid any stray bullets. Gonzalez tried to keep the group calm through the whole ordeal, which went on past four in the morning…[Read More]